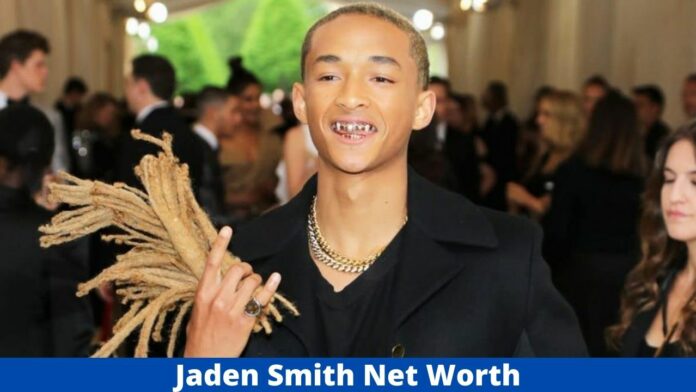 Jaden Smith is the son of actor Will Smith and model Jada Pinkett Smith. He is an American actor, singer, rapper, and songwriter. Jaden has been a part of the acting profession since he was a child when he co-starred in The Pursuit of Happyness with his father.

Jaden Smith is the son of Jada Pinkett Smith and Will Smith and was born on July 8, 1998, in Malibu, California. Trey Smith (born 1992) is his older half-brother, while Willow Smith is his younger sister (born 2000). Smith was homeschooled by his parents after attending New Village Leadership Academy. Smith’s famous status as a result of his roles in films like The Pursuit of Happyness and his parents’ roles as acclaimed actors led to him being excluded from enjoying a normal childhood, which he has discussed extensively. He began to skateboard.

Smith and his siblings were Project Zambi youth ambassadors, assisting Zambian youngsters orphaned by AIDS in collaboration with Hasbro.

Jaden Smith’s net worth and salary

Jaden Smith is an actor and singer from the United States with an estimated net worth of $8 million. Smith began his career as a child actor in The Pursuit of Happyness, opposite his renowned father Will Smith, but because of his musical aptitude and a propensity for incredibly weird social media posts, he swiftly branched out into his own kind of solo superstardom.

The actor debuted a new gold grill on his teeth, which came at an exorbitant price. Jaden’s glittering diamonds on his teeth, according to MTO News, cost him $50,000. The diamond-encrusted jewelry not only drew focus away from the rest of Jaden’s ensemble, but it also drew notice from admirers on social media.

Smith made his important acting debut in the 2006 film The Pursuit of Happyness as Christopher Gardner, the son of Will Smith’s character. For his portrayal, Smith won the award for Breakthrough Performance at the 2007 MTV Movie Awards. Smith later reprised his role as Jacob in Scott Derrickson’s 2008 science fiction picture The Day the Earth Stood Still, a remake of the 1951 film of the same name.

In 2010, Smith played alongside Jackie Chan in The Karate Kid, a remake of the 1984 blockbuster.

In May 2013, Will Smith and Jaden Smith acted as father and son in the film After Earth. In 2014, Smith announced his return for the sequel Karate Kid 2 starring Jackie Chan. Breck Eisner will direct the film, which will be produced by James Lassiter and Will Smith and written by Zak Penn.

In April 2014, Smith was cast in the film The Good Lord Bird, based on James McBride’s 2013 novel of the same name. In Kansas Territory in 1857, Smith plays Henry Shackleford, a young slave who meets abolitionist John Brown.

After the release of his mixtape, Cool Tape Vol. 2, Smith took a break from acting to focus on music until returning in 2017 to star in the Netflix original The Get Down.

Smith also had a voice acting role in Neo Yokio and a role in Nashville as himself. He explained his break from acting by saying, “The kinds of jobs I was being offered weren’t precisely what I was looking for.” “Until this came along, I didn’t feel like I needed to be in anything.”  Smith has returned to acting in films with the announcement of a skateboarding-themed flick. On June 21, 2018, Crystal Moselle’s Skate Kitchen released its first official trailer, which featured Smith as the main character. The film was officially released on August 10, 2018, following its premiere at Sundance in Winter 2017. In Cara Delevingne’s Life in a Year, he’ll next be seen.

Smith collaborated with Canadian artist Justin Bieber on the song “Never Say Never” in 2010. The song reached number eight on the Billboard Hot 100, and it was certified five times platinum in the United States.

The Cool Cafe, Jaden’s debut mixtape, was released on October 1, 2012.

Smith began production on his debut studio album in 2014, and it took three years to complete.

Smith confirmed the title of his debut studio album, Syre, in December 2016.

On the same day, “Icon” was released as a single and peaked at #3 on the Bubbling Under Hot 100 Singles list.

Following Syre, Smith stated that his next project, Erys, would be released on December 14, 2017.

Syre: The Electric Album, a new project, was hinted at on Twitter afterward. Smith released the single “Ghost” featuring Christian Rich in the lead-up to the album’s release. On his 20th birthday, July 8, 2018, Smith shared the project exclusively on Instagram. Four days later, the product was made available on streaming services. Syre: The Electric Album is a guitar-centric rework of Smith’s studio album Syre, with Jimi Hendrix and Sgt Pepper’s Lonely Hearts Club Band as influences. Smith’s second studio album, Erys, was released less than a year later on July 5, 2019, and debuted at number 12 on the US Billboard 200.

Smith was revealed as an opener for J. Cole’s KOD Tour, alongside Young Thug and EarthGang, on July 30, 2018, and played for the first time at Lollapalooza on August 2.

Kid Cudi, one of Smith’s influences, expressed interest in collaborating with him on an album, which Smith supported, indicating that he would like to do so in the future during an interview on August 21, 2018.

Smith released the song “Cabin Fever” off his third album CTV3: Cool Tape Vol. 3 on July 24, 2020, which he characterized as “basically completing the trilogies of Syre and Erys at the same time” as well as “completing the trilogy of the prior Cool tapes.”

The song “Falling for You” features a collaboration with Smith’s friend and previous collaborator Justin Bieber. Jaden released the single “BYE” on June 21, 2021. Jaden launched a new version of CTV3: Day Tripper’s Edition on all streaming platforms on August 27, 2021.

Jaden Smith, like the other famous offspring, inherited enormous quantities of money from both of his parents. Will Smith, Jaden Smith’s father, established trust and invested almost $20 million in it as soon as he was born. This trust fund has grown in value over the years and is now worth more than $38 million.

Assets and Investments of Jaden Smith

At the age of 15, Jaden Smith famously filed for emancipation from his parents, with their blessing, in the hopes of obtaining his own home separate from the family home. Smith seemed ambivalent about moving out on his own in a 2013 interview with Ellen DeGeneres alongside his father Will:

“People don’t realize that everything at his place is free. So I’m going to stay in his place for another 20, 30 years because I can get anything I want. Will Smith says that as soon as I make a film that is bigger than one of his, I’ll be able to buy my own home.”

Jaden and Willow Smith, on the other hand, moved out of their parent’s house in 2017 and purchased a $4 million mansion in Hollywood Hills.