Joey Defrancesco, the munificent Jazz Organist, saxophonist, and trumpeter of America died on...
HomecelebrityWhat Was Alex...

What Was Alex Trebek’s Final Net Worth? After Death Earnings! 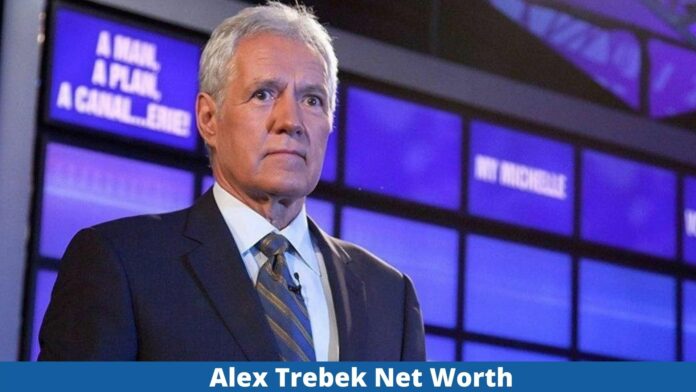 What was Alex Trebek’s net worth?

Alex Trebek was an American game show host who was born in Canada and had a net worth of $75 million when he died. His most famous role was as the host of the syndicated game show “Jeopardy!” From 1984 till his death in November 2020, he presented the show. Trebek died of pancreatic cancer on November 8, 2020, at the age of 80, after a year-long fight.

What was Alex Trebek’s net worth at the time of his death?

Trebek was born on July 22, 1940, in Sudbury, Ontario, Canada, to George Edward Trebek (born Terebeychuk), a chef who moved from Ukraine as a kid, and Lucille Marie Lagacé (April 14, 1921 – 2016). Trebek’s maternal grandmother was born in Mount St. Patrick, near Renfrew, in Renfrew County, Ontario.

He grew up in a family that spoke both French and English. Trebek was on the verge of being expelled from the boarding school where his parents had put him. He went to military college shortly after but dropped out when he was asked to chop his hair.

Trebek’s first employment was as a bellhop at the hotel where his father worked as a cook when he was 13 years old. Trebek went to Sudbury High School (now Sudbury Secondary School) before enrolling at the University of Ottawa. Trebek earned a bachelor’s degree in philosophy from the University of Ottawa in 1961. He was a member of the English Debating Society as a university student. He was considering a career in broadcast news at the moment.

He earned a philosophy degree from the University of Ottawa in 1961. He began his television career the following year, working for the Canadian Broadcasting Corporation (CBC). He began by filling in for broadcasters, then progressed to reading the national news and covering a variety of special events for the CBC’s television and radio divisions.

Career as a Host

Trebek’s first hosting assignment was in 1963 for the Canadian music show “Music Hop.” In Canada, he also hosted the high school quiz show “Reach for the Top” (1966), was a CBC classical music host from 1967 to 1970, and hosted the weekly afternoon game show Strategy (1969). After securing a job presenting NBC’s new game show “The Wizard of Odds,” he traveled to the United States in 1974. He hosted NBC’s “High Rollers,” the second season of “The $128,000 Question,” and the first and only CBS game show he worked on, “Double Dare,” in the 1970s and 1980s. Trebek also hosted “Battlestars” on NBC from October 1981 to April 1982, a six-month series. Because the production company Catalena Productions went bankrupt, he did not get a paycheck for his services as the host of the show “Pitfall.”

Trebek taped two episodes for a resurrection of the game show “Jeopardy!” with the help of game show media tycoon Merv Griffin, and the show was picked up. He started presenting it in 1984, and it is the most well-known role in his long career. After the original “Jeopardy!” host Art Fleming declined the project owing to artistic issues, he secured the job as host. Since then, the revival of “Jeopardy!” has been a huge hit, garnering a record-breaking 33 Daytime Emmy Awards. Trebek set the Guinness World Mark for most game show episodes hosted by the same host when he hit 6,829 episodes with “Jeopardy!” in 2014, surpassing Bob Barker’s record from “The Price is Right.” For his efforts on the shows “To Tell the Truth,” “Classic Concentration,” and “Jeopardy!” in 1991, he created broadcast history by becoming the first person to host three American game shows at the same time.

Trebek appeared on a wide range of shows as a panelist or player in addition to his hosting positions. In 1980, he competed in a week-long round-robin competition on NBC’s “Card Sharks” alongside numerous other game show hosts, including Allen Ludden, Bill Cullen, Wink Martindale, Jack Clark, and Gene Rayburn, for charity. In the end, he was victorious in the event. In 1975, he starred on NBC’s “The Magnificent Marable Machine,” and in 1978, he appeared on “To Say the Least.” Trebek appeared on “Celebrity Bowling” in 1976 with Jim McKrell, and the two won their match against Dick Gautier and Scatman Crothers.

In 1974, Trebek married businesswoman Elaine Callei. They divorced in 1981 and never had children together. In 1990, he married real estate project manager Jean Currivan, with whom he has two daughters. In 1998, he was granted naturalization as a US citizen.

He was diagnosed with stage IV pancreatic cancer in March 2019 and received extensive therapy. He had been cancer-free for one year as of March 2020. Unfortunately, Alex died of cancer on November 8, 2020, at the age of 80, much to the surprise of the world.

Trebek revealed in a 2014 podcast interview with The Nerdist that he donates a considerable amount of his annual income to charity. In 1998, he gave the Santa Monica Conservancy 74 acres of land in the Hollywood Hills. The donation increased the size of the public parkland by a factor of two. Hikers and cyclists have already made extensive use of the trails. He gave $5 million to the University of Ottawa’s Alex Trebek Forum for Dialogue in 2016. He has given the school, which is his alma mater, a total of $7.5 million.

Trebek experienced a small heart attack at home on December 11, 2007, but returned to work in January 2008 as planned.

He tore his Achilles tendon pursuing a burglar into his San Francisco hotel room in July 2011, requiring six weeks in a cast. Trebek had another small heart attack in June 2012 but was able to return to work the next month.

Trebek was taken to Cedars-Sinai Medical Center on December 15, 2017, during the winter break of Jeopardy! taping, after apparently experiencing difficulties after a fall in October of that year. A subdural hematoma ensued from the incident. Trebek underwent surgery the next day to remove blood clots from his brain.  Trebek had suffered a fall, according to the verified Twitter account of Jeopardy! on January 4, 2018. Trebek took a brief medical break before returning to hosting duties in mid-January 2018.

Trebek mentioned retirement in a 2018 interview with Fox News’ Harvey Levin, claiming the odds of him quitting Jeopardy! in 2020 were 50/50 “and a bit less.” He said that if he is “not making too many mistakes,” he may stay, but that he will make an “informed decision” on when he should step down as emcee. He signed a new deal to continue as host through 2022 in October of that year, claiming in January 2019 that, despite his age, the show’s workload, which consists of 46 taping sessions per year, was still manageable.

Trebek lived in a 10,000-square-foot house in Studio City, California, that he bought for $2.15 million in 1991. Alex’s widow placed this home for sale in January 2022 for just under $7 million. Emily Trebek, Alex’s real estate agent daughter, was in charge of the listing: