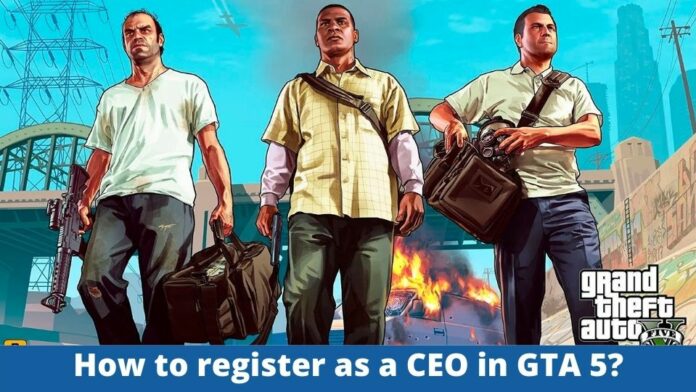 In GTA Online, how does one become a CEO? There are various advantages to governing your industry, encompassing the proficiency to enrol Associates to assist you, launch VIP Work assignments, and, most honourably, purchase and regulate your criminal empire. However, you’ll require to become a CEO to have a part in all of these events.

After enrolling as a CEO in GTA 5 Online, players will obtain many rewards. Here’s all you need to remember if you want to be one yourself.

GTA Online is a vast environment in which you can participate in a wide range of activities. You can compete in online races, join a club, and team up with your online buddies to perform complex heists. There’s no disputing, though, that being a CEO, VIP, or MC President in the game opens a lot of options for you.

Once you’ve enrolled as a CEO, you’ll be able to hire other players to help you with menial jobs; this is just one of the numerous advantages that come with being a CEO. So, if you want to take advantage of these features in GTA 5, it’s probably time to upgrade.

Benefits of becoming a CEO in GTA 5

To begin, you should be aware that after you become CEO, all VIP/Bodyguard advantages will be carried over. Furthermore, the CEO tag will enable you to bribe officials to get out of difficult situations. You can also turn off the minimap radar for your organisation and its members.

Once a player registers as a CEO in GTA 5, they will have access to more business prospects. Purchasing facilities such as warehouses and offices will also allow you to get new automobiles. This also enables users to spawn different vehicles for themselves or their organisation’s members.

Of course, once you’ve achieved the title of CEO, you won’t have to worry about losing it. You’ll keep your CEO position indefinitely, or until you return to the SecuroServ menu and resign.

Steps to become a CEO in GTA 5

GTA 5’s creators continue to provide regular updates that keep the game fresh and enjoyable to play. Players can register as a CEO or VIP in GTA Online to hire other players to act as in-game bodyguards and work together to complete challenges. These hired Bodyguards will be compensated for escorting their CEO through Los Santos’ hazardous streets.

To begin, players must purchase an executive office in GTA 5 Online to register as a CEO. It’s worth noting, though, that buying an office in the game costs a minimum of $1,000,000.

Steps to become a VIP in GTA 5

When compared to becoming a CEO in GTA 5, becoming a VIP costs significantly less money. That’s because becoming a VIP doesn’t necessitate the purchase of an office; all you need is $50,000 in your bank account.

So, if you have that kind of money, register as a VIP by following these steps:

Gamers that have played previous GTA games, such as GTA IV, are aware of how the storyline works throughout the game. The game career’s goal is based on a large number of missions, which also serve as the story’s backbone. To progress further in the storyline, you must accomplish these missions in order. It may appear to be simple, but it is far more difficult. In between missions, players must deal with a variety of dynamic encounters. They must perform numerous side tasks and business enterprises to earn money and purchase various items to gain access to new objectives.

To reach your goal and complete your mission, you must travel long distances. It occasionally gives you back-to-back car travel goals inside a single mission, which can be annoying. GTA Online is a multiplayer online game mode in the game. Another issue in this section is that there are no shortcuts, and you must accomplish the goal task by getting on the highway, which extends the operation’s time. It also contains some in-game bugs that make finishing it tough.

The storyline of GTA 5

The whole GTA 5 story takes place in the virtual city of Lost Santos, which is situated in the state of San Andreas. The crime stories of particular maniacs who are also criminals are central in Grand Theft Auto V.

Their in-game career methods are all based on satire of the criminal justice system. Michael De Santa, a middle-aged gangster, is the protagonist of the story. In a blundering robbery, he tugs a string with the feds. Witness protection was the arrangement.

Trevor Philips, Michael’s old partner in crime, is a sociopath. Trevor unexpectedly happens to be in the city, where he joins Michael and the two of them reunite to form a three-man gang.

They plan to finish the last few high-paying jobs. However, multiple tale connections disrupt the whole scenario, resulting in the carnage in their lives. The concept of combining three separate individuals with diverse histories to create something more original and extreme for GTA 5 Android’s entire plot is insane and enjoyable.

GTA 5’s online option may have more content than the original game over ten years after its release. You can even become the CEO of your own company, or at the very least a VIP, if you play your cards well and save up enough money.

In GTA V, becoming a CEO comes with a slew of benefits. Not only does becoming a CEO make you a permanent CEO, but it also allows you to earn more money and weaponry from your enterprises, as well as unlock additional vehicles.