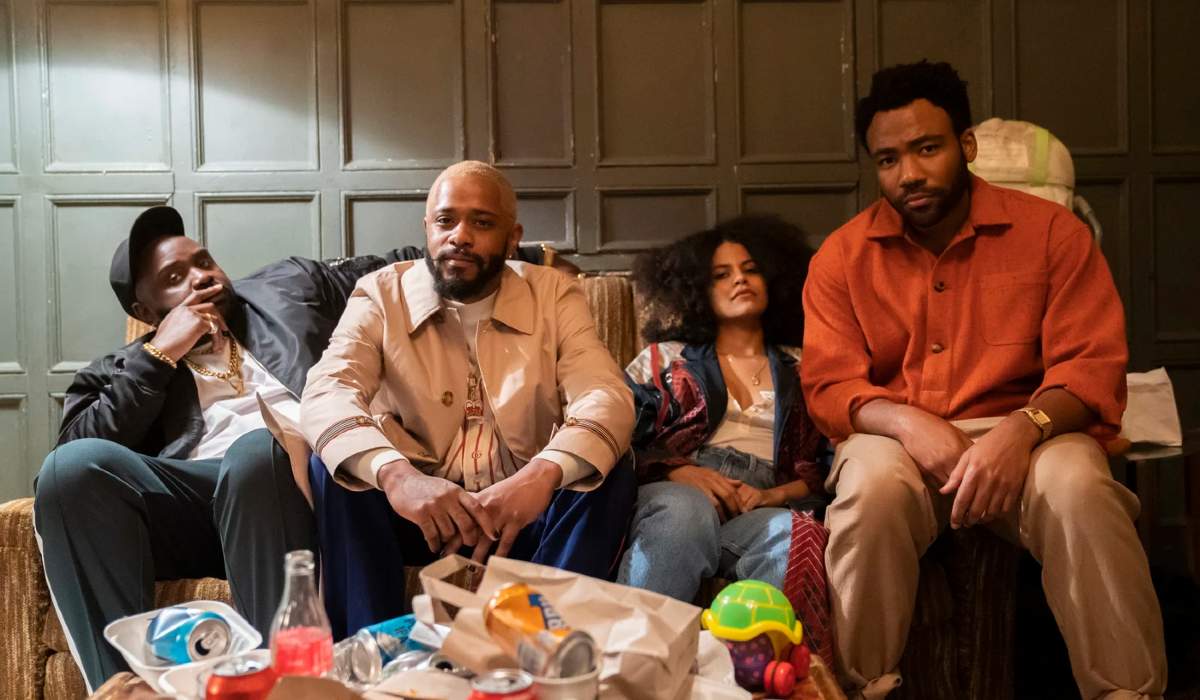 The third season of Atlanta, an American television series, will air on March 24, 2022. The season is produced by RBA, 343 Incorporated, and MGMT. Entertainment, and FXP, with executive producers Donald Glover, Paul Simms, Dianne McGunigle, Stephen Glover, Hiro Murai, and Stefan Robinson. Donald Glover is the showrunner and creator.

Donald Glover, Brian Tyree Henry, LaKeith Stanfield, and Zazie Beetz are among the cast members. Earn’s daily life in Atlanta, Georgia, is followed as he attempts to redeem himself in the eyes of his ex-girlfriend Van, who is also the mother of his daughter Lottie, as well as his parents, his cousin Alfred, who raps under the stage name “Paper Boi,” and Darius, Alfred’s eccentric right-hand man. The season is set in Europe, as the characters are on a European tour.

Here is everything you need to know about Atlanta season 3.

When Will Season 3 of Atlanta be Released?

We finally know when we can expect more Earn and Paper Boi shenanigans. Season 3 will air on March 24, 2022, according to FX. The show is returning to our screens after four(!) long years, so be excited and mark your calendars for Thursdays this spring, as the show airs weekly. (It will also be accessible on Hulu.)

The plot of Atlanta Season 3:

The show follows Earn (Donald Glover) as he tries to redeem himself in the eyes of his ex-girlfriend Van (Zazie Beetz), who is also the mother of his daughter Lottie, as well as his parents and his cousin Alfred (Brian Tyree Henry), who raps under the stage name “Paper Boi.”

Earn has no money and no place to live after dropping out of Princeton University, so he alternates between living with his parents and his ex-girlfriend. When he finds that his cousin is on the edge of popularity, he attempts to reconnect with him in order to better his and his daughter’s lives.

“All I could think was, why isn’t anyone stopping us?” “How come no one stopped us?”

Amber (Laura Dreyfuss) is speaking to her wife (Jamie Neumann), who is deep in a plot that has spun out of control for either of these two white women. They’ve exhibited both a profound and stunning inhumanity, as well as the dismal whimsicality of racism and the ease with which new laws may be devised by those in command, as if for their own enjoyment.

This is both “Atlanta” and “Not-Atlanta.” The program, which is returning to the air for the first time since 2019, has ditched its characters for this episode, moving beyond the narrative to deliver a story of stunning force.

Leave it to “Atlanta” to return after almost four years with an episode that included almost none of its ensemble cast, save for a quick cameo by Donald Glover, the show’s creator, at the conclusion.

The program has previously experimented with form: “B.A.N.” from the first season was an episode-long piece of media critique that took the shape of a 30-minute broadcast from a fictitious TV network.

However, reintroducing us to the world of “Atlanta” without any of the show’s familiar tools—Glover’s, Zazie Beetz’s, LaKeith Stanfield’s, and Brian Tyree Henry’s performances—as well as the social milieu in which they float—is a task that only a show this confidence in its ambitions would attempt.

And “Atlanta” rises to the occasion, delivering an episode that convinces you its tale needs to be told. The tremendous assuredness of the opening episode, as well as the profound concern with looking uncomfortably hard and discovering the bleak comedy and ludicrous tragedy within American life, is precisely what makes this show great once again.

The premiere focuses on Loquareeous (Christopher Farrar, outstanding), a young man who is eager to act out in class; we see him impatiently twirling a pencil, lost in thought until his teacher shares some good news with the class, at which point he leaps to his feet and dances, cheered on by his classmates.

This dance is the catalyst for a slow-motion tragedy: His mother and grandpa are summoned to school and, enraged, yell at and hit him (the “Three Slaps” that give this episode its title).

A well-meaning and, incidentally, white-presenting school social worker contacts Child Protective Services, and Loquareeous is soon living with two white women as the fourth of their children. All have been adopted or fostered, and they are all black.

The episode’s storyline is quite straightforward. The social worker, for example, is confronted with a difficult situation: Loquareeous’ mother and grandpa are concerned about his future as a Black man in this nation and want more for him, even if their expression appears harsh or just inappropriate.

And she emerges with the straightforward assurance of a true believer. “Don’t worry, I’ll get you out of there,” this self-proclaimed rescuer murmurs to Loquareeous.

And where she receives him is a household that is revealed from the beginning to be a place where blackness is both fetishized and erased: It’s significant that Loquareeous is Black, since that means he has to be saved.

But, in order to save him, these white ladies want to ensure that nothing of him remains, not even his name: they provide him with a towel embroidered with the word “Larry,” and that is how they refer to him.

This episode appears to have been inspired by the 2018 massacre in which two white women, a married couple, slaughtered their six adopted children (all of whom were Black); that horrible narrative, like “Three Slaps,” stands at a crossroads of race, class, and insanity.

Both the anecdote and the episode that riffed on it are terrible examples of how certain white adoptive parents regard black children as needing saviors rather than just love.

However, something transformational is also at work. The genuine story is almost too depressing to fathom, but writer Stephen Glover finds excruciating insight in tracing its aspects, which include not only abuse but also white parents’ attempts to dominate and reshape children of color.

On the other hand, the show’s story could have been nihilistic; instead, there’s a probing, open curiosity that reaches all the way to the ladies themselves. Despite the lucidity of the tale, there is a readiness to be perplexed that has always fit “Atlanta.”

The lady at the core of this story’s insanity is given the opportunity to explain herself, and all she can say is that some force more powerful than whites should have intervened to stop them. What remains is the perplexing logic of racial hatred.

Stephen Glover and director Hiro Murai (both executive producers on the show) have created an episode that stands out while fitting into the series. The willingness of “Atlanta” to change itself isn’t restricted to exceptional episodes like this one: This season, the action revolves around our primary characters in Europe, where Paper Boi (Brian Tyree Henry) is on a concert tour for mostly white audiences.

The second episode of the season is more clearly identifiable as “Atlanta,” and it looks a lot like America in certain ways: Our heroes are accosted at every step by white Europeans dressed in blackface as part of a Christmas celebration that quickly takes on the appearance and feel of a society-wide parade of mocking.

Glover, the series’ star, continues to discover new methods to show a kind of unsurprised uncertainty, confused by what’s going on around him but not astonished that it’s unintelligible.

“Atlanta” has a keen ear for such sounds, the mind-boggling, predictable components of white misinterpretation of Black existence. The woman frying fried chicken in a microwave is an early indication that “Three Slaps” is acting in the register of the parable, which is an unusually broad sort of business. But the spectacle goes on, and this chicken supper becomes a metaphor for everything Loquareeous is obliged to eat.

When the show concludes, viewers will most likely recall how it began: With an apparently unconnected tale in which two friends, white and black, fish on a lake, the white fisherman gradually reveals that the lake was built after the government diverted water to overwhelm a black settlement.

The resolution of that narrative is too fitting to reveal here, but suffice it to say that there, as in the early going of this current “Atlanta” season, the white urge to reform or reconstruct blackness, to reimagine it as something white people can enjoy (or own), is a devouring force. And what it leaves behind is such total devastation that you’d never know anything was ever there in the first place.

Atlanta has been widely praised by television reviewers. Rotten Tomatoes, a review aggregation website, offers the first season a 97 percent approval rating based on 74 reviews, with an average rating of 8.58/10.

According to the website’s critical consensus, “Atlanta offers a unique platform for star and series creator Donald Glover’s distinctive style of humor as well as a lot of pertinent, trenchant insights.” The first season has a Metacritic score of 90 out of 100 based on 36 critic reviews, signifying “universal acclaim.”