In news that came as a shock to all Euphoria fans, Barbie Ferreira,...
HomeEntertainmentScissor Seven Season...

Scissor Seven Season 4: Will It Return With a Season 4? 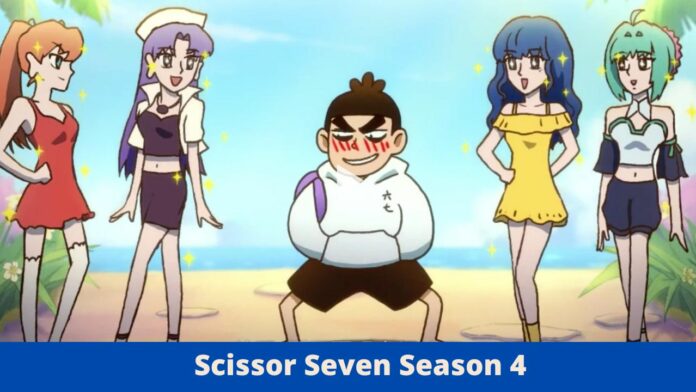 Scissor Seven is a Chinese animated streaming television series. It was available on Netflix under the title Scissor Seven. At the end of the third season’s last episode, a cinematic sequel to the series was revealed.

The Chinese anime ‘Scissor Seven’ (also known as Killer 7) is making waves across the world for its lighthearted spin on the typically gloomy assassin tale.

Seven, a hairstylist with amnesia who aspires to be an assassin, is the protagonist of the anime. His lack of expertise for the somewhat sophisticated professional choice frequently results in amusing situations.

Three seasons of the anime have already been broadcast, and a film adaptation is in the works. The issue now is if the anime will return for another season in the future. Here’s what we know thus far.

Will There Be a Scissor Seven Season 4?

The fourth season of ‘Scissor Seven’ has yet to be officially renewed. The third season of the anime ended on a cliffhanger. According to director He Xiaofeng’s WeChat post, we may expect more seasons in the future. The director indicated that the anime will be canceled after 10 seasons as part of a “20-year-long IP operation.” Scissor Seven will first air in China on Bilibili, Tencent Video, Youku, iQIYI, and Sohu Video before being distributed globally on Netflix. Anime is popular both in China and throughout the world. As a result, a fourth season looks to be a distinct possibility.

When Does Scissor Seven Season 4 is Anticipated to Come Out on Netflix?

Even if the anime gets renewed for a fourth season, we will have to wait a while before it is accessible on Netflix. The anime may only be seen on the streaming service after it has aired in China. There will be at least an eighteen-month gap between seasons before it is released on Netflix. According to these timetables, Scissor Seven’s fourth season will most likely be published in China in mid-late 2022 and will be accessible for foreign viewing on Netflix by 2023.

However, it is worth noting that the third season finished with the announcement that a Scissor Seven feature film is in the works and would be released in 2022. As a result of the film, the production and release date of Scissor Seven Season 4 may be delayed. As a result, it’s possible that it’ll be available on Netflix by 2024.

What Could Be the Story of Season 4?

‘Scissor Seven,’ unlike Japanese animation, is not based on a manga series. As a result, anticipating what will happen next is increasingly challenging, particularly when a film is in production. The upcoming picture, according to rumors, will be a prequel. In that case, season 4’s narrative would most likely pick up where season 3 left off.

However, if the film is not a prequel, as has been theorized, it will have an effect on the storyline of Season 4. Season three of ‘Scissor Seven’ ended on a cliffhanger. The anime’s protagonist is Seven (Ronny Chieng), a hairdresser with amnesia who desires to be an assassin. His lack of knowledge for the fairly advanced profession choice regularly leads to hilarious situations. As a result of the black ice toxin, Seven gradually loses recollection of his Chicken Farm buddies.

Season four will most likely focus on the fallout from Seven’s poisoning. Unless he miraculously recovers, the wanted assassin may lose all recollection of his Chicken Farm friends. Even if Seven manages to leave with his memory intact. It is clear that Manjusaka and Shimen are hell-bent on capturing him, putting him and Thirteen at grave risk. As a result, another attack is likely in the near future. In any event, as everyone’s favorite inept hairdresser-turned-assassin strives to make a name for himself, there will certainly be more of Scissor Seven’s particular humor.

Who Could Join the Scissor Seven Season 4 Cast?

Seven is played by Ronny Chieng.

Ronny Chieng, a comedian-actor, plays assassin Seven in the English version of the anime. Chieng’s prior credits include Godzilla vs. Kong and Shang-Chi and the Legend of the Ten Rings.

Other cast members that might make a comeback include:

Is There an Official Scissor Seven Season 4 Trailer?

Although there is a distinct possibility for a Season 4, tyhe show has not been renewed, which is why there is no trailer to date. But if you are so much interested in watching a Scissor Seven trailer, then you’d better consider a Season 3 trailer instead,

Not only is the anime a fan favorite, with an IMDB rating of 8.3/10 and a season average of 8.12/10 on My Anime List. It also exemplifies Netflix’s foray into Chinese content. As a result, if the series is renewed in China, the streaming behemoth will almost certainly keep the license and distribution.