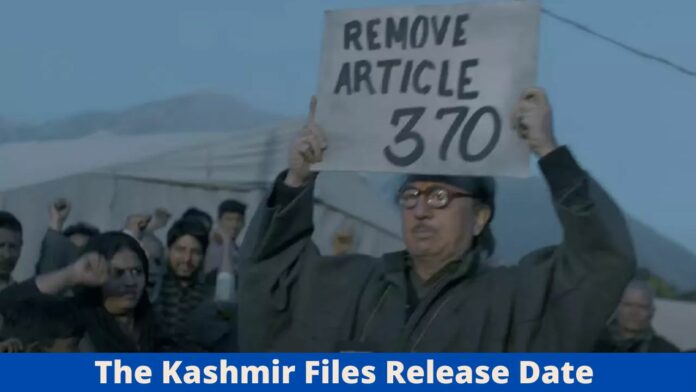 The Kashmir Files is a forthcoming Indian Hindi-language drama film written and directed by Vivek Agnihotri, produced by Abhishek Agarwal, and starring Mithun Chakraborty and Anupam Kher. The video depicts the departure of Kashmiri Hindus in the early 1990s as a result of the Kashmir insurgency. The film was scheduled to be released theatrically globally on January 26, 2022, coinciding with India’s Republic Day, but it was postponed owing to the spread of the Omicron strain. The film will now be released on March 11, 2022.

The Kashmir Files is the most contentious film in recent memory since it depicts the most heinous crimes that occurred in Kashmir roughly 32 years ago. Vivek Agnihotri wrote and directed the film, which stars Mithun Chakraborty and Anupam Kher in major roles.

Following all of the problems, The Kashmir Files film trailer was released today on Zee Studios’ YouTube site and quickly went trending. The film is planned to appear in theatres on March 11, 2022.

Zee5 is a brand-new streaming service. It is, however, coming up to the major names by having some very fantastic movies in its catalog. The OTT platform has acquired digital rights to the ‘Kashmir Files,’ making it the newest addition.

The Story of the Kashmir Files

The Kashmir Files is a forthcoming film that examines the 1990s exodus of Kashmiri Pandits, which resulted in the forced flight of numerous Hindus from the Kashmir valley. The film focuses on the situation of Kashmiri Pandits and delves into one of Independent India’s greatest human tragedies.

The Kashmiri Pandits were forced to flee Kashmir owing to an atmosphere of dread and terror produced in the 1990s by the rise of independence-seeking terrorist organizations and Islamic insurgents who opposed the Hindu Kashmiri Pandits and sought to establish an Islamic state. The Kashmiri Hindu groups celebrate the 19th of January as ‘Exodus Day.’ The film is based on actual events and will undoubtedly have an engrossing plot.

Cast Of The Kashmir Files:

As we can see in the teaser, the film boasts a highly brilliant star cast that flawlessly performed the characters they were assigned. Their names are given here:

After conducting a considerable study on the flight of Kashmiri Hindus in 1990, director Vivek Agnihotri completed the script for The Kashmir Files. The script was completed by Agnihotri, who was stationed at an unknown location in the Himalayas. On 14 August 2019, Agnihotri released the first look poster for the film, stating, “the film will be an honest inquiry of one of the worst human tragedies.” In May 2020, Anupam Kher joined the cast as the film’s lead actor. The film’s original schedule was canceled owing to a coronavirus epidemic.

Later, Agnihotri replaced actor Yograj Singh, who was scheduled to speak at the 2020–2021 Indian Farmers’ Protest, with Puneet Issar.

Mithun Chakraborty became unwell during the second schedule owing to a stomach ailment, although he finished his segment a few hours later.

Sarahna, a line producer, committed suicide during the production.

On the set, director Agnihotri injured his leg during the final part of filming.

A PIL was filed in the Bombay High Court against the distribution of this film, seeking a stay of execution, claiming that it hurts the sensibilities of Muslims in India and only depicts one side of the story, potentially causing communal unrest. The court rejected the PIL.

What did Lieutenant General KJS Dhillon (Retd.) have to say about the film?

The Kashmir Files had a pre-release screening in Delhi on March 6. The screening was attended by prominent persons from many sectors of society, as well as Kashmiri Hindus.

Lieutenant General KJS Dhillon (Retd.) was also in attendance at the screening of The Kashmir Files and shared his comments thereafter. He just released a video of himself discussing his feelings after witnessing the film. In a tweet, he published a film titled “The Kashmir Files.” I was a part of history on January 19, 1990… and on August 5, 2019.

In essence, General Dhillon disclosed in the film that he was stationed in Kashmir as a Captain in the Indian Army during the horrible events that led to the departure of Kashmiri Hindus in 1990 and supported several Hindus. Similarly, after Article 370 was removed in August 2019, he was placed in Jammu and Kashmir. After speaking, Lt. Gen. Dhillon was greeted with a standing ovation.

General Dhillon’s remark occurred after the character represented by Anupam Kher in the film, a Kashmiri Hindu man, wrote over 6,000 letters to the government urging it to abolish Article 370 when the genocide and evacuation of Kashmiri Hindus were taking place in the valley. During the film’s viewing, the touching performance garnered a standing ovation.

The video transports viewers back to 1989 when the unrest began in Kashmir as a result of escalating Islamic Jihad, driving the vast majority of Hindus to abandon the valley. Between February and March 1990, around 100,000 of the valley’s total 140,000 Kashmiri Pandit people moved, according to estimates. In the years that followed, more of them emigrated, until just roughly 3,000 families remained in the valley by 2011.

The Kashmir Files, directed by Vivek Agnihotri, is based on actual events and is focused on the lives of Kashmiri Hindus. The documentary is based on video interviews with first-generation Kashmiri Pandits who were victims of the Kashmir Genocide. It was supposed to be released in theatres on January 26, 2022, however that date was moved back due to a rising amount of Covid-19 incidents. It will now be released on March 11th.

Trailer for The Kashmir Files

The trailer for Vivek Agnihotri’s much-anticipated film The Kashmir Files, directed by National Award-winning director Vivek Agnihotri, has finally ended the wait for fans who have been anticipating it since its announcement.

The clip, which lasts 3 minutes and 30 seconds, gives you goosebumps while simultaneously making you weep.

The video depicts the struggle of Kashmiri Hindus who were tortured and murdered by brainwashed Islamic fanatics and forced to flee their homes just because of their religion.

Anupam Kher and Mithun Chakraborty, both great performers in Bollywood, had crucial roles in the film.

The trailer also includes some intellectual sequences, such as discussions and demonstrations in which people demand and raise chants in support of Kashmir’s Azadi (Freedom).

The trailer was published together with all of its posters, and it has received a lot of appreciation from fans and industry insiders. Kangana Ranaut, the actress who played Tanu Weds Manu in Tanu Weds Manu, described it as “wonderful.”

The Kashmir Files is placed first on IMDb’s list of the “most anticipated Indian movies and series.” In the category, the film received 37.3% of the views.