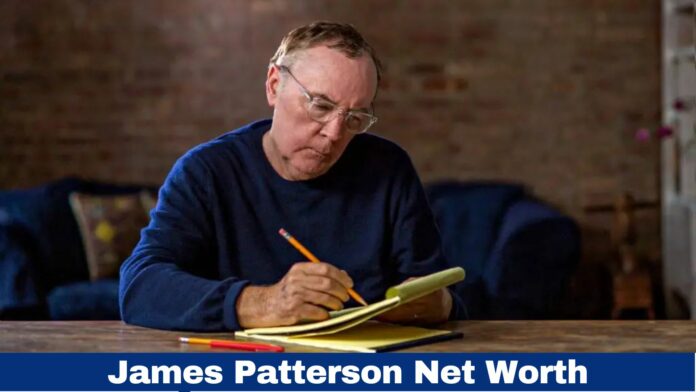 His novels have sold over 400 million copies worldwide, and he was the first individual to sell one million e-books.  Patterson topped Forbes’ list of highest-paid authors for the third year in a row in 2016, earning $95 million. Over a ten-year period, his total income is projected to be $700 million.

Patterson won the National Book Foundation’s Literarian Award in November 2015, citing him as a literary icon “ardent advocate for making books and reading a national priority.

Patterson, a major supporter of universities, teachers colleges, independent bookshops, school libraries, and college students, has contributed millions of dollars in grants and scholarships to encourage Americans of all ages to read more books.”

Patterson was born in Newburgh, New York, on March 22, 1947, to Isabelle (Morris), a homemaker and teacher, and Charles Patterson, an insurance salesman.

The family came from a working-class background and was of Irish origin. He graduated with honors from Manhattan College with a B.A. in English and Vanderbilt University with an M.A. in English.

While earning his B.A. in English at Manhattan College in the Bronx, he began reading, and with encouragement from family and friends, he began writing, a hobby that would become a lifelong fascination. As a child, James worked as an attendant at ‘Mclean Hospital’ in Belmont during the night shifts to help pay for his higher education.

After graduating college, he traveled to Vanderbilt University in Tennessee to seek a master’s degree and a Ph.D. in English literature. He stopped college after only a year because he feared his academics would suffocate his love of literature and that the Ph.D. itself was unimportant to him.

He moved to New York City in 1971 and, after being turned down for a cab driver job due to his long hair, he worked as a junior copywriter for a major advertising agency. Inspired by literature such as “The Exorcist” and “The Day of the Jackal,” he began writing commercial fiction in the mornings before going to work and during his lunch break at work.

At the age of 26, he authored his debut novel, ‘The Thomas Berryman Number,’ which was rejected by 31 publishers before being published by ‘Little, Brown and Company’ in 1976. The ‘Mystery Writers of America awarded him the ‘Edgar Allan Poe Award for the best debut novel.

Patterson launched the James Patterson Pledge with Scholastic Book Clubs in 2015 to get books into the hands of young readers.

Patterson’s most successful books feature forensic psychiatrist specialty psychologist Alex Cross. Patterson’s “Along Came a Spider” was initially published in 1993, and it has been included in over 25 novels since then. James is the author of various children’s book series, including “Middle School,” “Treasure Hunters,” “I Funny,” and “Dog Diaries.” His visual novels and stories have been adapted into films such as “Maximum Ride,” “Daniel X,” and “Witch & Wizard.” “Against Medical Advice” debuted in 2008, followed by “The Murder of King Tut” in 2009, “The Rise and Fall of Aaron Hernandez, the Superstar Whose Life Ended on Murderers’ Row” in 2018, and “The Last Days of John Lennon” in 2020. He has a number of paperback novels in the “Discovery’s Murder is Forever” series. “The President Is Missing,” written by James and Bill Clinton, was released in 2018.

In 2009, Patterson signed a 17-book deal with HarperCollins, pledging to publish or co-author six young adult novels and 11 adult novels by the end of 2012. Despite “Forbes” claims to the contrary, James has maintained that the deal is not for $150 million. The James Patterson PageTurner Awards were established in 2005 to provide “cash awards aimed to honor individuals, organizations, schools, and other institutions that find new and effective ways to encourage the love of reading books.”

James Patterson Entertainment, his production firm, received first-look partnerships with CBS Television Studios in 2014 and Entertainment One in 2020. Patterson, along with Stephen J. Cannell and Michael Connelly, featured as himself on “Castle” in 2009 and 2010, as one of the title subject’s gambling buddies. His works have also appeared in video games, including “Women’s Murder Club” PC titles “Death in Scarlet,” “A Darker Shade of Grey,” “Twice in a Blue Moon,” and “Little Black Lies,” as well as “Women’s Murder Club: Games of Passion” on the Nintendo DS. On the Nintendo DS, the game “The Ultimate Power” from the “Daniel X” series was also published.

Among the distinctions conferred upon him are the National Parenting Publications Honors Awards, the International Reading Association’s Young Adults’ Choices Booklist, the American Library Association’s “Teens Top Ten” Pick, and the “London Times” Book Sense Children’s Pick. The Children’s Choice Book Awards named James Author of the Year for “Max” in 2010, and “Fang” was nominated for Teen Choice Book of the Year in 2011 and James Author of the Year for “Middle School: The Worst Years of My Life” in 2012.

Patterson has won the International Thriller of the Year, the BCA Mystery Guild’s Thriller of the Year, and the “Reader’s Digest” Reader’s Choice Award. The National Foundation’s Innovations in Reading Prize and the American Library Association’s Great Websites for Kids have both been awarded to ReadKiddoRead.

James Patterson’s net worth is expected to be $800 million in 2022. Between 2018 and 2019, James made a total of $70 million. Along with this, he is one of the world’s wealthiest authors. The majority of his earnings are generated by the sheer amount of books he sells.