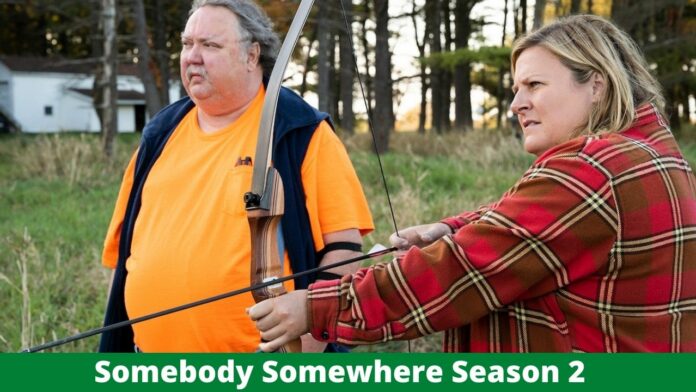 Somebody Somewhere is an American comedy-drama television series developed by Hannah Bos and Paul Thureen that stars Bridget Everett. On January 16, 2022, HBO aired the first episode. The series got revived for a second season in February 2022.

Has HBO Already Renewed Season 2 of Somebody Somewhere?

You’re going to adore the news we’re about to share with you today. Because, let’s face it, getting our favorite program renewed is one of the nicest emotions in the world. Let’s get to the topic right away.

The show Somebody Somewhere has been renewed for a second season, which was announced in February 2022. Yes, the program was renewed before the completion of season one.

This is hardly unexpected considering the show’s sincere nature, which drew a great number of replies after its first premiere.

“Bridget brings such warmth to the screen, and it’s been an absolute delight to see viewers connect with this ensemble.” In another season of Somebody Somewhere, Hannah and Paul will remind us all of where we came from.”

Bridget Everett appeared in this television series developed by Hannah Bos and Paul Thureen. Rotten Tomatoes has given the series a perfect score. The program has received “universal praise” with a Metacritic score of 86 out of 100.

When Can We Expect the Release of Somebody Somewhere Season 2?

Although the show has been renewed by HBO, no release date has been revealed so far. Thus, it is hard for us to depict exactly when the showrunner will release it.

Somebody Somewhere Season 2 Plot: What Could It Be About?

The first season introduces viewers to Sam, a middle-aged woman who is struggling to adjust to her hometown after the death of her sister.

Sam’s home life is also not going well, owing to a strained connection with her other sister, Tricia, and a relapsed alcoholic mother, Mary Jo.

When Sam is having a bad day at work, she meets Joel, a coworker, and the two become fast friends.

Joel invites Sam to his “choir” organization, which serves as a community for social outcasts. In their warm and inviting company, Sam begins to open up and is motivated to meet life’s obstacles straight on.

Sam’s newly found confidence is boosted even further when she rediscovers her long-lost passion for singing and re-connects with her friends. However, issues develop when Mary Jo is sent to rehab and Sam’s father, Ed, is unable to handle his finances.

Sam, on the other hand, helps Tricia deal with the fact that her husband, Rick, is having an affair with Charity, her business partner.

As the season comes to a conclusion, the survival of the singing group is jeopardized owing to the church’s investigation of their behavior. The charity also continues to annoy Sam and Tricia, even after they have taught her a lesson.

Joel, on the other hand, decides to pursue his dreams and begins a serious relationship with Michael. Later, as they are looking for a new site for choir practice, Sam takes charge of her life and inspires her friends.

Season 2 will expand on the events of Season 1 by focusing on the challenges Sam and the singing group face while seeking to relocate. It will also show how Tricia deals with Charity in the aftermath of Rick’s betrayal.

All narrative lines will be examined, including Mary Jo’s return from rehab and Ed’s response to her, Joel and Michael’s future plans, and Sam’s new profession after starting work on Fred’s farm. Finally, it may represent the introduction of new people into Sam’s life and how she handles them.

Expected Characters and Cast of Season 2

HBO ordered Somebody Somewhere to series in July 2020, based on the life of Bridget Everett, who plays the lead role and is also an executive producer.

The series was shot in the Chicago suburbs, particularly in Lockport and Warrenville. The filmmakers picked Chicago as a filming site because of the accessible talent pool, according to Hannah Bos “We cast a number of roles in Chicago, and the talent pool was incredible. It was amazing to have so many options for so many different professions. I’m prejudiced because I adore the Chicago acting style — which I believe is incredibly grounded, very genuine, and very subtle — and we had a plethora of amazing performers to draw from to populate our universe.”

Is There a Trailer for Somebody Somewhere Season 2?

Unfortunately, the trailer is yet to be released by HBO. Until then, enjoy watching the official trailer of the first season.

On Rotten Tomatoes, the series has a perfect score of 100 percent based on 18 reviews, with an average rating of 8.2/10. According to the site’s critical consensus, “Somebody Somewhere examines the human condition with sensitivity, elegance, and love, led by a fascinating Bridget Everett.” The series has a Metacritic score of 86 out of 100 based on 12 reviews, indicating “universal acclaim.”