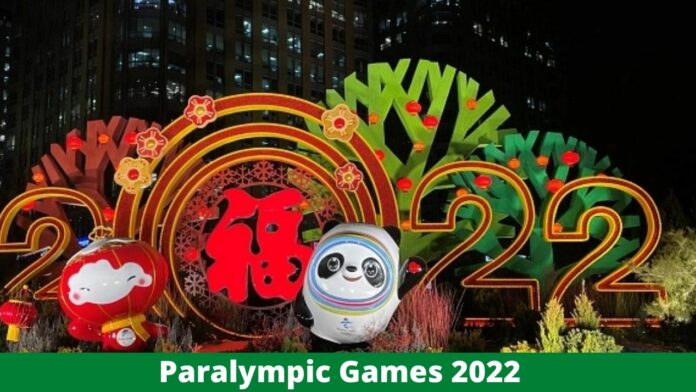 The 2022 Winter Paralympics, often known as the Beijing 2022 Paralympic Games and formally recognized as the XIII Paralympic Winter Games, are an international winter multi-sport parasports event presently taking place in Beijing, the People’s Republic of China. It is slated to run from March 4 through March 13, 2022.

The Winter Paralympic Games 2022 are due to begin today in Beijing, only a few weeks after the Beijing 2022 Winter Olympics ended on February 20. The Paralympics are the world’s largest athletic event for competitors with physical disabilities, with a variety of disciplines on offer. To commemorate the opening of the Winter Games, Google has designed a new animated Doodle featuring numerous Winter Paralympic Games 2022 sports. In the meanwhile, Google released a static Doodle to commemorate the commencement of the ICC Women’s Cricket World Cup 2022 on Friday.

Beijing was chosen as the host city for the Paralympics for the second time in 2015 at the 128th IOC Session in Kuala Lumpur, Malaysia.

Here is all you need to know about the Paralympics in 2022:

On July 31, 2015, the 128th IOC Session in Kuala Lumpur, Malaysia, Beijing was chosen as the host city of the 2022 Winter Olympics, defeating Almaty by four votes.

How can I watch the Paralympics online?

The whole schedule of live broadcasts and highlights may be seen here.

Paralympic games were first organized in:

The inaugural Paralympic Games were held in 1948. On the opening day of the 1948 Summer Olympics in London, the United Kingdom, the first organized sporting event for impaired athletes coincided with the Olympic Games. Dr. Ludwig Guttmann, who was born in Germany to Jewish parents, organized a sports tournament for British World War II veterans with spinal cord injuries. The first games, known as the 1948 International Wheelchair Games, were held to coincide with the 1948 Olympics.

A total of 49 National Paralympic Committees has qualified competitors as of March 2, 2022. Azerbaijan, Israel, and Puerto Rico will compete in their first Winter Paralympics, while Liechtenstein, Estonia, and Latvia will compete for the first time since Lillehammer in 1994, Salt Lake City in 2002, and Turin in 2006.

On February 24, 2022, the first day of Russia’s invasion of Ukraine, the International Olympic Committee criticized Russia’s violation of the Olympic Truce.

According to IPC President Andrew Parsons, bringing the Ukrainian squad to Beijing would be a “mammoth challenge.”

The International Olympic Committee (IOC) requested that the flags of Russia and Belarus not be displayed at any international sporting event, the latter due to officials of the Belarus Olympic Committee being accused of political discrimination against Belarusian athletes and the country’s participation in Russia’s aggression against Ukraine. The Russian flag is already banned from international sporting events owing to World Anti-Doping Agency penalties (WADA). On the 28th, the IOC urged for Russian and Belarussian athletes to be barred from competing.

On February 4, 2022, the opening ceremony of the 2022 Winter Olympics was place in Beijing National Stadium.

In the midst of the Games’ political difficulties and tensions, IOC President Thomas Bach encouraged participants to “display how the world would look like if we all respected the same rules and each other,” and promised that “there [would] be no discrimination for any cause whatsoever.”

The final seven torchbearers represented multiple decades of Chinese athletes, beginning in the 1950s and ending with two skiers competing in the Games—21-year-old Shanxi skier Zhao Jiawen (the first Chinese athlete to compete in Nordic combined) and 20-year-old Dinigeer Yilamujiang from the Xinjiang autonomous region (cross-country, and the first Chinese cross-country skier to win a medal in an ISF event).

For the first time in Olympic history, the final torchbearers did not burn a cauldron but instead placed the torch in the center of a giant stylized snowflake made of placards containing the names of the delegations competing in the Games.

Three comparable snowflakes were also created as public fires in Beijing, one outside the stadium, two in Yanqing District, and one in Zhangjiakou, the latter two lighted by speed skater Yu Jongjun and skier Wang Wezhuo.

On 20 February 2022, the 2022 Winter Olympics concluded with a cultural showcase, closing statements, and the ceremonial transfer to Milan and Cortina d’Ampezzo as hosts of the 2026 Winter Olympics at Beijing National Stadium.

Broadcast rights to the 2022 Winter Olympics have already been agreed upon in several nations through long-term contracts. In France and the United Kingdom, Eurosport was the primary rightsholder; the BBC sub-licensed a small amount of free-to-air television coverage as part of a deal in which the BBC sold the pay-TV rights to the 2018 and 2020 Games to Eurosport. The BBC stated in January 2022 that it will broadcast approximately 300 hours of free-to-air live coverage, as well as highlight programs.

The schedule of the Games had an influence on the U.S. broadcast rights to the Super Bowl, the National Football League’s (NFL) championship game, and historically the most-watched television program in the United States each year. To avoid the Games competing for viewership and advertising sales with Super Bowl LVI, which was scheduled for 13 February 2022 at Los Angeles’ SoFi Stadium, CBS and NBC announced in March 2019 that they would swap the rights for Super Bowl LVI and LV (2021) so that both the 2022 Winter Olympics and Super Bowl LVI would be broadcast by NBC.  NBC aired their prime-time coverage for Day 10 of the Games right following the game, breaking from the customary pattern of running debuts or special episodes of entertainment programs after the Super Bowl to capitalize on its enormous audience. Furthermore, the NFL’s new media rights beginning in 2023 (which expands the Super Bowl rotation to four networks) codify this situation, with all of NBC’s future Super Bowl games taking place during the Winter Olympic years (2026, 2030, and 2034).

This edition also reinforced the event’s continued pattern of diminishing viewership in the United States, with the event reaching historically the lowest television ratings.

Will Russian or Belarusian competitors compete in the 2022 Winter Paralympics?

The International Paralympic Committee (IPC) announced on Thursday that Russian and Belarussian athletes will no longer be permitted to compete in the 2022 Winter Paralympics in Beijing after various teams threatened to boycott the Games.

The decision comes less than a day after the International Paralympic Committee (IPC) first allowed competitors from both nations to participate as neutrals under the Paralympic flag and anthem.
According to IPC President Andrew Parsons, Russian athletes should not be considered as “aggressors,” and the organization’s governing council does not have the jurisdiction to ban competitors outright due to the organization’s constitution.

“Through no fault of our own, the conflict has now come to these Games, and various Governments are having an effect on our treasured event,” Parsons stated.

“We made our decision yesterday with the long-term health and existence of the Paralympic Movement in mind.” We are adamantly committed to the concepts and ideas that have helped shape the Movement into what it is today.

“What is obvious, however, is that the fast increasing crisis has now placed us in an unprecedented and difficult position so close to the opening of the Games.”

In the previous 12 hours, an amazing amount of people have contacted us and have been really open, for which I am glad. They have informed us that if we do not change our decision, it would have serious ramifications for the Paralympic Winter Games in Beijing in 2022.” Several NPCs, some of whom have been approached by their governments, teams, and athletes, have threatened to withdraw from the competition. With this in mind, and in order to protect the integrity of the Games as well as the safety of all competitors, we have decided to reject athlete submissions from RPC and NPC Belarus.

“To the para-athletes from the afflicted nations, we are very sorry that your lives have been disrupted by your governments’ decisions to violate the Olympic Truce last week.” “You are victims of your governments’ actions,” Parsons remarked.

The Games, which begin on Friday with the Opening Ceremony, will include 71 Russian and 12 Belarussian Paralympic athletes, as well as advisors from both countries. Both nations, according to Parsons, will take legal action.

On Thursday, Parsons explained the decision, saying that “no one is delighted” with the conclusion, but that it was “the best choice for the Paralympic Games to go forward.”
Parsons further denied that the IPC misjudged the extent of opposition from NPCs, teams, and athletes in the aftermath of the first decision.

While he couldn’t give an exact figure, he did say it was “an extremely high amount.”
“We have another 600 athletes for whom we need to ensure that the environment allows us to hold the Games and that they can live in harmony in the Paralympic Villages,” Parsons said at a press conference on Thursday.

How to register as a CEO in GTA 5?