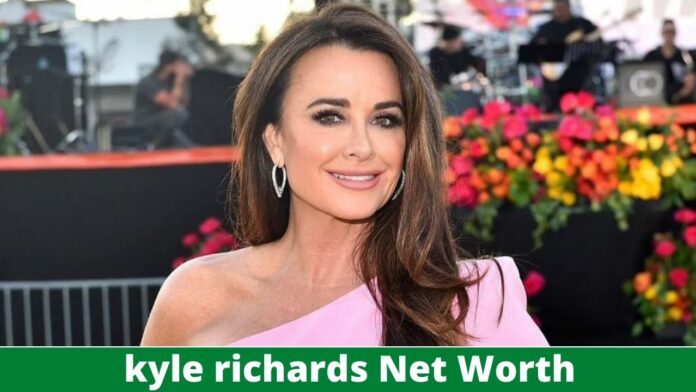 Kyle Richards is a businesswoman, actor, and television personality. Although she began her career as an actor in 1974, she is most well-known for her performances on ‘The Real Housewives of Beverly Hills.’

Kyle Richards is a reality television personality and actress from the United States with a net worth of $100 million. Kyle is married to Mauricio Umansky, a well-known real estate executive. Mauricio individually sells more than $150 million in real estate each year.

Kyle Richards was born on January 11, 1969, in Hollywood, California. Richards’ parents divorced shortly after she was born, and the divorce was official by the time she was three years old. Kyle Richards was born into a wealthy household with several connections. Kim Richards and Kathy Hilton are among her siblings. The latter is the mother of famous celebrities Paris and Nicky Hilton.

Richards began her career in show business as a kid. She appears in 18 episodes of ‘Little House on the Prairie’ in 1974. Richards’ older sister Kim had also starred in an episode of the series previous to Richards securing her part as Alicia Sanderson Edwards.

Richards’ cinematic debut was in the 1977 thriller picture ‘The Car,’ in which the two sisters co-starred. She won a role in ‘Eaten Alive’ a year later. Throughout the late 1970s, Richards appeared in a number of television shows, including ‘Fantasy Island,’ ‘Flying High,’ ‘Time Express,’ ‘Vega$,’ and ‘Carter Country.’ Richards rose to prominence after co-starring Lindsey Wallace in the 1978 horror picture ‘Halloween’ with Jamie Lee Curtis. Richards’ name has become synonymous with the horror picture genre at this point. Her next appearance in a horror film was in the 1980 supernatural picture ‘The Watcher in the Woods.’ Richards also appeared as the lead in the 1989 horror film Curfew.’

When she earned a role in the 2006 comedy picture ‘National Lampoon’s Pledge This!,’ starring her niece Paris Hilton, she took a break from the horror genre. Richards also appeared in the 2014 comedy film ‘The Hungover Games’ as a supporting actor. Although Richards is most known for her reality television shows, she will reprise her part as Lindsey Wallace in the 2021 film ‘Halloween Kills,’ which is a sequel to the 1978 film in which Richards initially portrayed the character.

Throughout the 1980s, 1990s, and 2000s, Richards’ primary concentration was on her television career. During this period, she appeared in a number of series. ‘Down to Earth’ and ‘ER’ are two of her most well-known shows. She is, however, best known as one of the primary cast members of the Bravo reality television series ‘The Real Housewives of Beverly Hills.’ She made her debut appearance in the series in 2010, and she has since featured in over 200 episodes. Richards has also featured in various other reality television shows as herself.

Richards rose to prominence after appearing as a candidate on the 2017 season of ‘The New Celebrity Apprentice.’ In this season, the celebrity participants compete to generate funds for their chosen charity, with Richards opting for Children’s Hospital Los Angeles. Richards succeeded well in the series since she not only lasted seven episodes but also raised $25,000 for her charity. Richards has previously labored to generate funds for this organization, and she and her husband have given more than $100,000 to the hospital. She has also sponsored charity events that have been highlighted on ‘The Real Housewives of Beverly Hills.’ Kyle Richards was also an executive producer for the NBC comedy series ‘American Woman,’ which premiered in 2018. The series was based on Richard’s childhood in the 1970s.

Her Other Business Ventures

Kyle Richards has generated money from a variety of sources outside of her career in cinema and television. She debuted in the fashion industry in 2012, with an eight-piece collection for the retail network HSN. In 2019, she collaborated with Shahida Clayton to establish a second apparel brand. Their ‘Kyle + Shahida’ collection debuted at New York Fashion Week. Kyle by Alene Too, a network of stores in New York City and The Hamptons, is owned by Richards. She formerly ran a store in Beverley, which she started in 2012. The Beverley Hills store, on the other hand, closed in 2018. Kyle Richards has also generated money by releasing her novel, ‘Life Is Not a Reality Show: Keep It Real with the Housewife Who Does It All.’ The book provides insight into Richards’ life as well as advice on family life, relationships, and beauty. It was released in 2011.

How is Kyle Richards so rich?

She has grown extremely wealthy as a result of her work in entertainment, as well as the money she has gained in fashion and via her various business activities. Her spouse, Mauricio Umansky, is reported to have a net worth of $40 million, giving the pair a combined net worth of $90 million.

Until the entrance of her sister, Richards held the crown for the wealthiest cast member.

Aside from performing, Richards is a successful entrepreneur who owns numerous clothing brands, including NYFW. Richards’ net worth has grown dramatically since she joined RHOBH. Her business pursuits and acting career have resulted in sizable net worth. Despite the fact that Richards’ net worth is in the millions, several newspapers combine her riches with her husband’s.

Kyle Richards married for the first time in 1988. When she was 18, she met a man named Guraish Aldjufrie in Indonesia. The couple married when she became pregnant with his child. Despite the fact that Kyle Richards raised the daughter, Farrah, the marriage did not endure. The divorce was completed in 1992.

She met her next spouse, Mauricio Umansky, two years later. Mauricio, a highly successful real estate agent, was born in Mexico before entering the Los Angeles real estate market. His firm specializes in selling exceedingly costly residences in wealthy communities. Kyle Richards converted to Judaism as a result of her husband’s beliefs after the couple married in 1996. The couple shared three daughters.

The Academy of Science Fiction, Fantasy, and Horror Films nominated Kyle Richards for Best Supporting Actress in 1982 for her work in The Watcher in the Woods. She was also nominated for a Young Artist Award three times.

Kyle and Mauricio paid $3 million for a house in Los Angeles’ Bel-Air district in 2011. This is the mansion that was most frequently utilized during the production of “The Real Housewives of Beverly Hills.” In 2017, they listed the house for the first time. In January 2022, they eventually accepted a $6.5 million offer.

Kyle Richards, a philanthropist, and her husband have been named top benefactors to the Children’s Hospital of Los Angeles. Over the course of their life, the couple gave more than $100,000 to the medical center. Kyle Richards gave her winnings from The New Celebrity Apprentice ($25,000) to the Children’s Hospital of Los Angeles. During one of The Real Housewives of Beverly Hills episodes, she also conducted a fundraiser for the hospital.