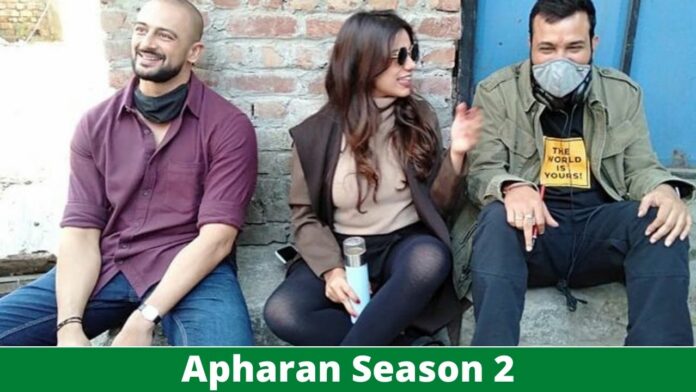 Apharan, Arunoday Singh’s famous web series, will return for a second season. Arunoday, the Inspector of Uttarakhand Police, is on a risky assignment this time. The teaser for Apharan 2 was released on Thursday. Arunoday’s manner and style are fascinating in the teaser. Apharan Season 2 is the most anticipated series, and the first teaser trailer is already available.

Sidharth Sengupta directed and co-produced Apharan, an Indian Hindi-language action thriller web series, for the video on demand platform ALTBalaji in 2018. Arunoday Singh stars in the show. The series is set in the present day and centers around kidnapping, suspense, mystery, and nonstop action.

Apaharan Season 2 will be available on the Voot Select OTT platform. The show’s release date has yet to be confirmed, but according to our sources, it will be in April 2022.

Talking about the first season, which comprised of the 12th episode and was published in 2018, Ekta Kapoor observed a favorable reaction from the audience, so she gave some space in her head and is now finally with a season 2. Because of the previous Seasons Mall, they are able to entertain and portray the roles so skillfully. Varun Badola, Mahie Gill, Monica Chaudhary, and Nidhi Singh played minor roles in the previous series.

Ekta Kapoor discusses Season 2 of ‘Apharan,’ as well as her opinions on the project: “This program will give the exciting, edge-of-your-seat drama that audiences have been yearning for!” Almost everything, from threats to dramatic situations to action sequences to riddles to desire to retaliation, will be increased in magnitude. Each character has an own set of traits that have been carefully examined.”

Furthermore, “I believe that each story has something special to offer, and I believe that ‘Aparhan 2’ will be sure to catch the public’s attention,” she says.

Arunoday Singh describes his views about playing a grey character as follows: “Season 1 of Apharan was tremendously well received and lauded by reviewers and audiences alike.” The opportunity to play Rudra Srivastava had its own set of challenges and physical demands, but I was thrilled to be acting such a complex character.”

It was a dramatic climax to ‘Apharan 1,’ in which a cop called Rudra (Arunoday Singh) battled against all odds while digging into the thoughts of criminal minds to unearth the truth.

In the second season of the show, the officer will return for yet another abduction story set in India and Serbia. The narrative was written in collaboration by Siddharth Sengupta, Umesh Padalkar, and Anahata Menon. The teaser for the series has been posted and will be accessible on Voot Select.

The Apharan Season 2 Trailer Promo is making the farm so fascinating since it is full of a lot of amusement and excitement, which is giving fans the idea that they should watch the series. Oriented very happy birthday is taking over the trailer video and praising God for bringing the program back for another season. There are several comments on the show’s trailer indicating that it is receiving a great response from the audience and will be a smash hit.

let’s watch the official trailer below and get some idea of what is about to be next.