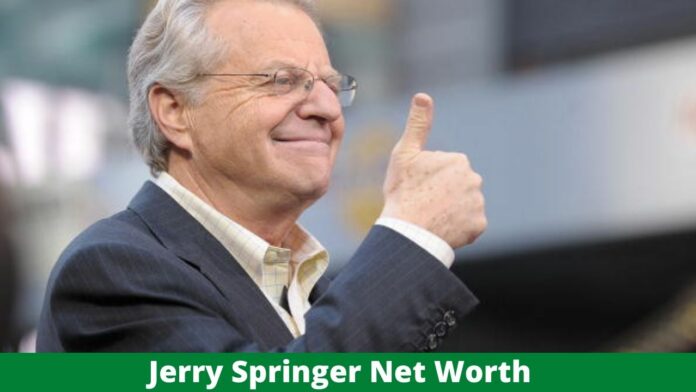 Gerald Norman Springer (born February 13, 1944) is a British-American journalist, presenter, actor, producer, and former lawyer and politician. Between September 30, 1991, and July 26, 2018, he hosted the tabloid talk program Jerry Springer, and in 2015, he started the Jerry Springer Podcast. Springer has been hosting the courtroom show, Judge Jerry, since September 2019.

Jerry Springer is a wealthy English-born American television host with a net worth of $60 million. Without a question, Jerry Springer is best known as the host of “The Jerry Springer Show,” a tabloid talk show that began as a political commentary program in 1991 but turned its focus to tabloid news in the mid-’90s to obtain higher ratings.

Gerald Norman Springer was born on February 13, 1944, in Highgate, London, England. During World War II, he was born at the London Underground station of Highgate, where Londoners were sheltering from German bombardment. His parents were Germans who had fled the Nazis. Sadly, some of Jerry’s family members, including his maternal grandmother, died in concentration camps. In January 1949, his family immigrated to New York and resided in Queens. Jerry graduated from Forest Hills High School. In 1965, he received his undergraduate degree from Tulane University, and in 1968, he received his J.D. from Northwestern University. Springer worked as a broadcaster for WTUL New Orleans FM, a student radio station, while an undergraduate at Tulane University.

Springer went to work for a law company in Ohio after graduating from college. He subsequently launched a political career. He worked as a campaign strategist for Robert F. Kennedy for a while. Jerry continued to practice law in Cincinnati after Kennedy’s killing and was elected to the city council in 1973. Meanwhile, he began his career in television, mostly as a political analyst and news anchor. Jerry was elected as Cincinnati’s 56th mayor in 1977 and served from 1977 to 1978. He ran for governor of Ohio in 1982 but did not receive his party’s nomination.

During his tenure as mayor of Cincinnati, he hosted “The Springer Memorandum” radio comments on WEBN-FM. Springer’s broadcasting career was sparked by the popularity of his commentary. Springer was employed as a political reporter by WLWT, an NBC station in Cincinnati. When Springer arrived, it was Cincinnati’s lowest-rated newscast. Springer was the most popular news anchor in the city two years later. For the next five years, he was the most popular anchor. He received ten local Emmys for his efforts.

“The Jerry Springer Show” debuted on September 30, 1991. The show was created to be similar to “The Phil Donahue Show.” The show started out as a political chat show, featuring guests like Jesse Jackson and Oliver North. Springer and his new producer then modified the structure of the show to more scandalous tabloid issues in quest of higher ratings in 1994. Guests were generally challenged on stage by a spouse or family member with a confession to make, which resulted in manufactured violence and yelling. By 1998, “The Jerry Springer Show” had surpassed “The Oprah Winfrey Show” in a number of cities.

Springer took over as host of “America’s Got Talent” for the second and third seasons, succeeding Regis Philbin. When he left, Nick Cannon took over as “AGT” host for the next eight seasons.

Springer’s talk program is also popular in the United Kingdom, which prompted ITV to contact Springer about filling in as a co-host on “This Morning with Judy Finnigan” in March 1999. In the year 2000, he filled in again. He also created 12 episodes of a U.K. version of his show for ITV. He shot “Jerry Springer UK” in the same studio where he shot his American program. Springer also had a five-episode ITV series called “Springer” that aired in the United Kingdom in May and June of 2000. The show was then taken up by Channel 5 in the United Kingdom and renamed “Late Night with Jerry Springer.” In 2000 and 2001, there were two seasons with a total of 16 episodes.

The most recent fresh episode of “The Jerry Springer Show” aired on July 26, 2018. The show aired for a total of 28 years. From 1991 to 2009, it was filmed in Chicago, and from 2009 to 2018, it was taped in Stamford, Connecticut. The CW network, which has the rights to make new episodes of “The Jerry Springer Show,” began airing reruns immediately.

The courtroom drama “Judge Jerry” premiered on September 9, 2019. In early February 2020, it was renewed for a second season. NBC Universal distributes “Judge Jerry,” which is shot in Stamford, Connecticut.

In 1973, Springer married Micki Velton and had one daughter, Katie Springer (born 1976). In 1994, they divorced. Springer keeps his personal life secret.

He is a New York Yankees enthusiast who attends home games on occasion.

During his appearances on “The Jerry Springer Show,” his crowd shouted “Jerry, Jerry.” On “Judge Jerry,” this practice has been maintained.

Springer recorded the album “Dr. Talk” for Fiddle Fish Records in 1995, which was primarily comprised of country song covers.

Springer participated in “Dancing with the Stars” in 2006. On the third season of the famous show, he was paired with Kym Johnson. He allegedly intended to participate on the show in order to learn to waltz in time for his daughter Katie’s wedding. In the seventh week of the tournament, he was eliminated.

Springer delivered the graduating address at Northwestern University School of Law on May 16, 2008. He earned a standing ovation from around half of the audience, and his address was generally well-received. Later, he remarked that his lecture was about “the ethical decisions we all have to make in whatever business we go into.”

Jerry Springer departed Chicago, where he had been taping his program since 1991, for Stamford, Connecticut, in 2009.

Every Monday and Tuesday, Springer drove from his home in Sarasota, Florida, to Connecticut to record episodes of “Judge Jerry.” He also taped a weekly webcast at another Kentucky facility. He tours the country in favor of Democratic candidates for public office.

Jerry Springer’s yearly pay was $8 million during the height of his program.

Jerry Springer has a four-bedroom, five-bathroom property on Bird Key, near Sarasota, Florida. The house is valued at little more than $2 million.