Joey Defrancesco, the munificent Jazz Organist, saxophonist, and trumpeter of America died on...
HomeEntertainmentClassroom of The...

Classroom of The Elite Season 2 Officially Confirmed, Here’s Everything We Know So Far! 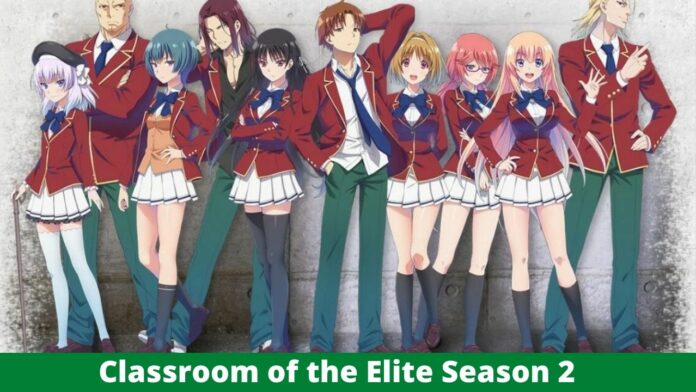 Fans of the wonderful anime series Classroom of the Elite are overjoyed to learn that season 2 has been announced after a four-year wait.

Anime fans are used to long gaps between seasons of their favorite anime, but there comes a point when optimism and expectation give way to doubt and uncertainty.

Classroom of the Elite was likely one of the best anime series of 2017, yet there has been no word about a sequel production.

Thankfully, it has already been confirmed that Classroom of the Elite will return to our screens for a second season!

The Classroom of the Elite Season 2 has been confirmed:

After a four-year break, the official Japanese website for the Classroom of the Elite franchise announced today (Feb 21) that a sequel adaptation is in the works.

Along with the news, a new character visual image was released, which can be seen below.

While news of the renewal is welcomed by Classroom of the Elite fans, the series’ eventual comeback will not surprise many members of the community.

Despite having aired four years ago, the anime still has a decent rating on different user-based feedback platforms. This includes a 7.6/10 rating on IMDB, a 4.6/5 rating on Crunchyroll, and a 7.84/10 rating on MyAnimeList, which has over 515,000 reviews!

Then there’s the argument that there’s plenty of source material from the original light novel series to adapt into another anime season. According to Anime Geek, Episode 12 ended around Volume 3 of the original series.

The good news is that the light novel series has had 11 volumes released in Japan, with five volumes of ‘Year 2’ being serialized from January 2020 to October 2021.

Speculated characters in the Classroom of the Elite

No anime is complete without a strong cast of characters, and “Classroom of the Elite” is no exception. Aside from the protagonist, Kiyotaka Ayanokji, who is voiced by Shouya Chiba in Japanese and Justin Briner in English (through Myanimelist), there are other supporting characters in “Classroom of the Elite.” Suzune Horikita (Akari Kitou/Felecia Angelle), another soft-spoken-yet-intelligent student who finds herself in the academy’s lower ranks, rapidly befriends Kiyotaka. Kikyou Kushida (Yurika Kubo/Sarah Wiedenheft), a popular student of Suzune and Kiyotaka, joins them and seeks to befriend all of her academic friends, particularly Suzune.

Although the character list for the series has not been announced to date, we expect the same influential characters to make their return. The former season was undeniably a hit and a part of the success must be credited to the characters who garnered plaudits.

While many fans will probably be satisfied with viewing “Classroom of the Elite” in its native Japanese, those who favor dubs will be pleased to learn that the English dub for this show has traditionally been released alongside its Japanese equivalent. When  “Classroom of the Elite” Season 2 is released, fans can probably anticipate this to continue. Overall, critics complimented the first season’s English dub, particularly Justin Briner’s performance as Kiyotaka (via Anime News Network).

What could be the plot of Season 2 of Classroom of the Elite?

Kiyotaka stealthily wins the school’s “Lord of the Flies-style” survival exam by correctly predicting the identity of each class leader as the first season of “Classroom of the Elite” concludes. However, following his victory, he discovers that his father has been actively working to get him expelled from school. Of course, this is likely related to Kiyotaka’s hidden reason for enrolling at the institution in the first place. Regardless, Kiyotaka chooses to continue his studies there.

If the second season follows in the footsteps of the first, “Classroom of the Elite” Season 2 will most likely remain mainly loyal to its manga and light novel source materials. The show’s source material, like many other anime adaptations, is oceans ahead of the anime in terms of story growth, which means Lerche has plenty of inspiration to pull on. Viewers are still unsure of Kiyotaka’s motivation for enrolling at this competitive institution. Furthermore, he has yet to genuinely rise to the top of his class in terms of academic accomplishment, and it is unclear how his father’s influence will affect this ambition. Clearly, these are all story strands that Lerche will have to continue when “Classroom of the Elite” Season 2 is made.

How many volumes of Elite Classroom are there?

As of February 2022, the first year Classroom of The Elite light novel series had 11 volumes published in Japan, with the second year having six books so far.

There is also a manga version of Classroom of the Elite. The manga ended with volume 11, which covered the entire first year. There’s also a manga for the second year, which began in early 2022.

The second season of The Elite’s classroom should have the same number of students as the previous season. Some light book enthusiasts were dissatisfied with the alterations made in the anime version. So I’m interested if they’ll include episode 0 to correct what the first season modified from the source material.

Also, after the second season, there should be enough material to make the third season of Classroom of The Elite.

Which Volumes Will Be Covered in Season 2?

Season 2 of The Elite’s Classroom will begin with light novel volume 4 and will most likely end with book 6. Volumes 1–3 were adapted for the first season of the anime Classroom of The Elite. We don’t believe the second season will be split into two courses.

So, if you want to pick up where the first season left off and continue the plot, check out Classroom of The Elite light novel volume 4 in English.

The second season of The Elite’s classroom should have the same number of students as the previous season. Some light book enthusiasts were dissatisfied with the alterations made in the anime version. So I’m interested if they’ll include episode 0 to correct what the first season modified from the source material.

Also, after the second season, there should be enough material to make the third season of Classroom of The Elite.

Where can I watch Season 1 of Classroom of the Elite?

Crunchyroll and Funimation are two websites where fans may watch Japanese anime shows. It can also be viewed on Netflix.