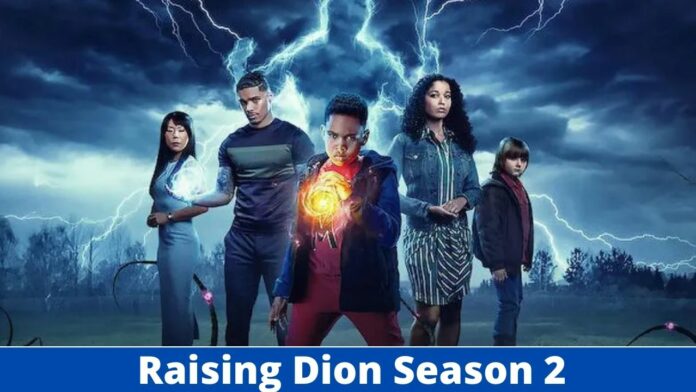 Raising Dion is one of Netflix’s many binge-worthy science-fiction programs. Based on Dennis Liu’s comic book and a short film of the same name, the series follows single mother Nicole (Alisha Wainwright) and her son Dion (Ja’Siah Young) as they cope with the death of Dion’s father, Mark (Michael B. Jordan). When Dion begins to display magical powers, from the Matilda-esque ability to float his cereal to the ability to teleport out of dangerous circumstances, an already convoluted scenario becomes insurmountable. Nicole, like any good “weird capabilities arise out of nowhere” drama (see: NBC’s Heroes or even Netflix’s Stranger Things), must shield Dion from potentially dangerous scenarios, such as strange foes or agencies searching for the opportunity to explore his skills.

Raising Dion’s first season premiered on Netflix in October 2019, leaving us with a few cliffhangers that beg for a second season. Here’s all we’ve learned about the series’ future.

When will Raising Dion Season 2 premiere?

Prepare for a fantastic winter since Raising Dion will return on Netflix on February 1, 2022. Fans of the show have had to wait a long time for new episodes, as Season 1 first aired in the fall of 2019. While the show was renewed in January 2020, the epidemic caused delays in the series’ ability to begin production.

Is there a trailer for Season 2 of Raising Dion?

Yes! Just a few weeks before the show’s premiere, Netflix released a trailer, and it appears that the show is ramping up the intensity from Season 1. The clip depicts the Crooked Man denying Dion’s takedown and asking the help of another boy, Griffin Robert Faulkner’s Brayden, to “destroy him.” Although Brayden appears to be creeping out Dion this season, now that he’s been looped into whatever sinister plan is in the works, it also appears like Dion is getting a better grasp on his talents than ever before in preparation to take him on. Fans will be thrilled to learn that there’s a sneak peek of some gravity-defying stunts and his ability to manipulate the environment, as well as a sight of his new trainer (Rome Flynn) in work.

Following the announcement that the series has been renewed for Season 2, Variety announced that the next edition will consist of eight episodes. That’s one fewer episode than the first season’s nine, but we’ll take what we can get. They’ll most likely be just as crammed with benign sci-fi shenanigans from the titular, aspiring superhuman, if not more so.

Who is set to return for Season 2?

Raising Dion wouldn’t be the same without the titular character and his mother, so it’s safe to assume that Ja’Siah Young, who portrays Dion, and Alisha Wainwright, who plays Nicole, will return. Season 2 has also confirmed Jazmyn Simon’s Kat and Sammi Haney’s Esperanza. Furthermore, given that Dion’s father, Mark, is still technically alive, we may see a bit more of Michael B. Jordan on television.

In terms of the rest of the cast, we’ll see more of Suzanne Wu, the CEO of BIONA, since Deadline revealed in February that Ali Ahn, who plays her, has been promoted to series regular. The same can be said for Griffin Robert Faulkner, who plays Brayden, another second-generation super like Dion. Since we saw a storm-like monster occupy Brayden after Pat (who masked his identity for nine episodes) was vanquished, it stands to reason that he’ll be in the spotlight much more in the following episodes. It has yet to be verified whether or not Jason Ritter, who plays Pat, will appear. However, upon the series’ renewal, the actor took to Twitter to express his delight for Season 2, which could imply that we’ll see him again.

Is there a new addition to the cast?

Netflix announced a slew of new cast members in February 2021. One of the new additions is Rome Flynn, of How to Get Away With Murder fame, who takes on Tevin Wakefield, a former Olympic track coach who becomes “Dion’s trainer and mentor.” He’s said to become close to Dion and Nicole, so expect to see him a lot next season.

It also appears that another super child, Janelle Carr, played by Aubriana Davis, is on her way to town (Genius: Aretha). According to Netflix, after being dubbed “destructive and dangerous,” the 15-year-anxious old’s mother Simone (played by another newcomer, Sweet Magnolia’s Tracey Bonner) brought her to BIONA for answers. The adolescent is known to have a strong bond with the Warren family.

As it appears that we’ll be spending a lot more time at BIONA, the series has added Josh Ventura (P-Valley) to the cast as David Marsh, the research facility’s new V.P. of Operations who has a personal history with Suzanne Wu.

What about the show’s creators?

When the show was renewed in early 2020, Variety announced that the same people that worked behind the scenes in Season 1 will be back for Season 2. Carol Barbee will return as showrunner, and while it’s unknown whether Michael B. Jordan will appear on screen, he will undoubtedly be executive producing behind the camera. This includes Kenny Goodman, Kim Roth, Dennis Liu, and Charles D. King.

What is the Season 2 plot?

After Nicole, Dion, and BIONA disintegrated Pat in the Season 1 finale, the Crooked Man’s pursuit of Dion and other supers was put on hold. However, the cliffhanger ending of the finale revealed that the stormy entity succeeded to inhabit Brayden, the son of one of the Crooked Man’s absorbed superpowered men. This lays the stage for a Season 2 confrontation between Dion and Brayden, focusing on the second generation of extraordinary kids.

The escalating tension between them will undoubtedly be at the forefront of the season, according to Netflix’s official logline. They might not fight right away, though. It’s believed to take place two years after the events of Season 1, with Dion befriending Brayden as he continues his training with a new teacher named Tevin. “A series of disturbing occurrences happen, and Dion discovers that danger is still looming,” once they connect.

It’s unknown what that danger is, but it appears to be more serious than in Season 1, as Dion and his mother are reported to have to protect the entire city of Atlanta. It’s possible that the looming threat holds answers to the fates of those who were consumed by the Crooked Man, most notably Dion’s father, Mark. During the Season 1 conclusion, his ghost temporarily became tangible, allowing him to converse with Nicole and Dion before fading away. Mark isn’t quite alive, but he’s also not quite dead, which means his fate is still unknown. Season 2 might be devoted to resurrecting Mark and those who were absorbed by the Crooked Man (and whose spirits were liberated upon his dissolution).

Angelina Jolie is a popular actress who is currently ruling Hollywood. The devoted artist is also the UN Goodwill Ambassador and has won multiple accolades in her lifetime. She gave many blockbuster hits to the industry and captured the...