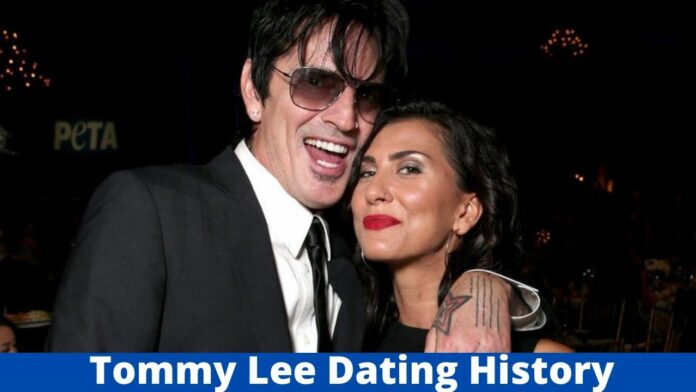 Tommy Lee has dated who?

Tommy Lee, like other celebrities, prefers to keep his personal and romantic life private, so come back frequently as we will continue to update this page with new dating news and rumors.

On Hulu’s Pam & Tommy miniseries, Lily James and Sebastian Stan may be unrecognizable as Baywatch star Pamela Anderson and Mötley Crüe drummer Tommy Lee, but the eponymous couple’s marriage is one of Hollywood’s most infamous sagas. Their relationship was marred by a controversy caused by a stolen sex tape that spread in the early days of the internet, as well as a six-month jail sentence for Lee for spousal battery after an incident with Anderson and their two children — both of which will be explored in the Hulu series.

While Lee’s marriage to and divorce from Anderson was his most publicized romance, the 59-year-old musician’s dating history is, to put it mildly, turbulent. Anderson, 54, was his third wife, and he’d previously and recently had a couple of high-profile engagements fall through. Lee has been married to actor and social media celebrity Brittany Furlan since 2019.

Here’s everything you need to know about Lee’s dating history and renowned ex-wives.

The Wedding of Tommy Lee and Brittany Furlan

Furlan, 35, rose to prominence on the now-defunct social media platform Vine, where she was one of the platform’s most-followed users. Before it went offline, she had 9.9 million followers and was designated one of Time’s 30 Most Influential People on the Internet in 2015. Furlan now has more than 4 million followers on Instagram and TikTok, where she frequently highlights her spouse. Furlan has recently moved into acting, appearing in We Are Your Friends, The American Meme, and Amazon Prime’s ongoing Paradise City.

Furlan and Lee were first seen together in Los Angeles in June 2017 and were evidently fans of one other long before they started dating. “We met online, but we knew about one other for years,” Furlan said in an interview with Fox News. He used to watch my Vine videos because he was one of my followers and I obviously liked his music. I was a fan of Methods of Mayhem and Mötley Crüe.”

The next year, on Valentine’s Day, they announced their engagement. Furlan posted her heart-shaped diamond on Instagram on February 14, 2018, with the message, “Well, this certainly beats chocolates!” “Hello, future Mrs. Lee.”

From 2009 through 2017, Lee dated singer Sofia Toufa, commonly known as SOFI, before dating Furlan. In 2013, they even worked together on a few tracks, including “Middlefingah” and “The Rules.” In February 2014, the couple announced their engagement on Twitter with the message, “There comes a time in a man’s life when you just know your partner is for LIFE!!” Say hello to my soon-to-be wife and fiancée @SOFIofficial.” Toufa took to Twitter as well, stating, “I’m something that rhymes with Beyonce!!!!!” The wedding was never held.

The Marriage of Tommy Lee and Pamela Anderson

Lee’s most famous whirlwind relationship was with Anderson, whom he married in 1995 after only four days of dating. They met on New Year’s Eve when she sent him a drink from across the bar, and he licked her face and followed her to Mexico, where they married, according to Elle.

Their turbulent marriage lasted three years and was riddled with tabloid drama, including the sex tape scandal that dogged Anderson’s career. After their electrician Rand Gauthier stole and sold an intimate recording, the two were entangled in a two-year court struggle and filed a $10 million lawsuit.

They finally divorced in 1998, after Lee was jailed for six months for violence on Anderson. She filed for divorce a few days after the confrontation in February 1998. Despite their split, the two stayed in an on-again, off-again romance for years until their divorce in 2008. Anderson and Lee have two sons, Brandon (25), an actor, and Dylan (24), a model.

The Marriage of Tommy Lee and Heather Locklear

Lee married Melrose Place actress Heather Locklear, who was 24 at the time when he was 23. According to People, they married in May 1986 in front of 500 guests. Locklear proposed to Lee after three months of dating, and the two remained married for eight years until their divorce in 1994. Lee was married for the second time. Locklear uploaded a funny Instagram snapshot of the two of them in May 2016 with the comment, “Happy 30 years baby,” indicating there is no hatred between the ex-couple.

The Marriage of Tommy Lee and Elaine Bergen

Prior to his more famous marriages, Lee was briefly married to Elaine Bergen (neé Starchuk) in 1984, when she was 18 years old. The length of their marriage varies, but some tales claim it lasted barely a few days.

Other Relationships And Rumored Girlfriends Of Tommy Lee

Aside from his several marriages and engagements, the rock musician has been linked to a number of other people. Kimberly Stewart, Rod Stewart’s 42-year-old daughter, was rumored to be Lee’s girlfriend in 2007. They reportedly saw one other for a few months and were seen kissing, but they did not openly disclose they were in a relationship.

Tara Reid (American Pie), 46, was another prominent celeb Lee allegedly dated in 2005. Reid dismissed the accusations in an interview with 2020 Jezebel, saying, “Never, never, never, never.” It’s hilarious.” “He was like my next-door neighbor,” she went on. I’d occasionally go out with him. He’s such a great person. We’d laugh at it. You know what it is, don’t you? When two prominent people spend out together, everyone assumes they’re dating. It isn’t true.”

Lee was supposed to be dating supermodel Naomi Campbell, 51, a year before. Her representatives denied the pairing to Page Six.

Lee was linked to Pink, the 42-year-old singer, in 2003, but the relationship wasn’t verified until a year later when Anderson appeared on The Howard Stern Show. When questioned if he was “having sex” with the “Just Give Me A Reason” singer, she said, “Oh yeah, totally.” Anderson responded, “I don’t know who dumped who,” before adding, “They’re not together.”

Lee dated Prince’s ex-wife, dancer Mayte Garcia, 48, from 2001 to 2003, and even got engaged to her. They separated up before the wedding, according to the Daily Mail, because she didn’t believe he was over Anderson.