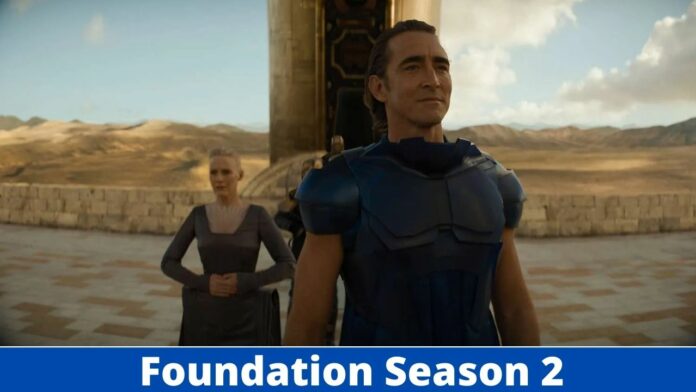 The series got renewed for a second season in October 2021.

The drama follows four pivotal characters as they travel through space and time to confront terrible crises, shifting loyalties, and tangled relationships that will determine humanity’s fate.

When Is Foundation Season 2 Coming Out:

Season 2 of Foundation was announced in October. At this point, no release date has been announced, but late 2022 is the best bet. When asked about the Season 2 release date, Apple informed Inverse that it could not be confirmed at this time. However, we know that Season 2 is in the works, so fingers crossed for 2022! Respect the calm and enjoy it!

Apple also announced that the following actors will be joining the cast of Foundation for season two:

Isabella Laughland plays Brother Constant, a happily confident claric tasked with evangelizing the Church of the Galactic Spirit throughout the Outer Reach. Constant is a true believer whose courage and enthusiasm make it difficult not to admire her.

Poly Verisof, High Claric of the Church of the Galactic Spirit, played by Kulvinder Ghir. He’s whip-sharp and acerbic, but he’s also a terrible drunk — smart enough to understand where he’s going, but too cynical to change.

Ella-Rae Smith as Cloud Dominion’s Queen Sareth. Sareth is used to being underestimated, and she uses it to her advantage, charming her way into the Imperial Palace with sharp humor, all while on a hidden revenge mission.

Hober Mallow, played by Dimitri Leonidas, is a master merchant with a sardonic personality and questionable morals who is summoned against his choice to serve a higher, selfless purpose.

Bel Roise, the last great general of the Superliminal Fleet and would-be conqueror of the Foundation is played by Ben Daniels. Bel is noble to a fault, yet his allegiance to the Galactic Empire is dwindling.

Mikael Persbrandt as The Warlord of Kalgan, a monster of a man coiled with muscle and possessed of extraordinary psychic skills, driven by hatred in his goal to rule the galaxy.

Tellem Bond, the mysterious leader of the Mentallics, is played by Rachel House.

Because of the show’s timetable, several of the original cast members from the first season will not be returning, however, Jared Harris, Lee Pace, Laura Birn, Terrance Mann, and Cassie Bilton will continue to appear in the second season.

As of now, Apple says Season 2 of Foundation is “coming shortly,” but I don’t expect to see a new episode until later this fall.

The Plot of Foundation Season 2:

Gaal cites several names, including “The Mule,” in one of her voiceovers at the beginning of the series. While “the Mule” does not appear in Season 1 of Foundation, he will almost probably appear in some manner, shape, or form in Season 2.

The Mule is a mutant villain that destroys the Seldon Plan through telepathy and cruelty in the second Foundation novel, Foundation, and Empire. Mentalics are persons who can utilize mindpowers to dominate others in Asimov’s universe. Members of the super-secret “Second Foundation” (teased this season) all acquire this power much later in the novels.

While Foundation Season 2 will almost probably focus on those two cliffhangers — the destiny of the Cleons and Gaal and Salvor’s collaboration — it will almost certainly introduce the Mule. Season 2 may have a more traditional structure as a result of everyone being concerned about the same thing at the same time.

When the show first aired, creator and showrunner David S. Goyer told Inverse that because Asimov’s books never “came to the end of the 1,000 years,” the series could, in a roundabout sense, finish the story.

To that point in the novel, the character of Demerzel, previously thought to be a legend in the Foundation galaxy, eventually emerges on Earth (in the novel Foundation and Earth). In Season 1 of the show, Salvor’s father mentions Earth in passing, implying that people are still unsure whether it exists at all. Could the search for Earth be the focus of Season 2? Maybe.

Is There A Foundation Season 2 TRAILER:

Apple TV has yet to release a trailer for the upcoming season.