Joey Defrancesco, the munificent Jazz Organist, saxophonist, and trumpeter of America died on...
HomecelebrityRihanna and A$AP... 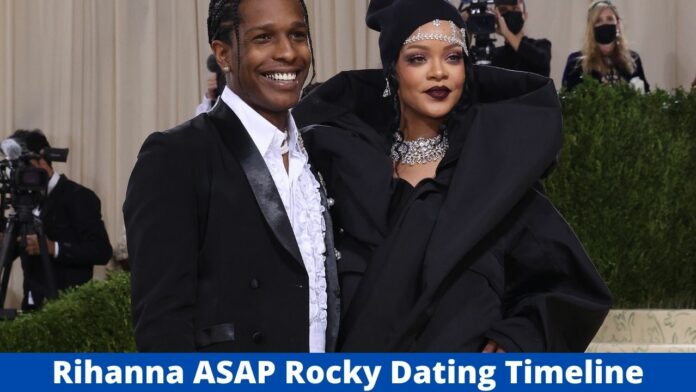 Rihanna and ASAP Rocky, who were first linked in 2013, are now fashion’s coolest couple. The singer and rapper have collaborated on numerous occasions over the years, sparking a slew of relationship rumours along the way.

Starting with the most recent update, here’s a look back at their relationship history:

Rihanna and ASAP Rocky are expecting a child together on January 31, 2022!

Almost a decade after they first became romantically involved, the singer and rapper revealed she is expecting their first child. This is the cutest thing I’ve ever seen.

The Daily Mail published photos of the 33-year-old Fenty designer wearing a bright pink coat unbuttoned above her stomach, revealing a baby bump. She’s holding hands with the rapper, Rakim Mayers, 33, as they share a kiss and pose for photos.

Years before Ri and ASAP became a couple, the two collaborated on several projects beginning in 2013. Yes, believe it or not, Rihanna appeared in ASAP Rocky’s music video for his single ‘Fashion Killa,’ and the two appeared to be getting *pretty* cosy on screen.

ASAP also supported Rihanna on the US leg of her Diamonds World Tour in 2013. So, yeah, these two have a long history.

During the same year, the pair were seen being affectionate together in New York, which sparked relationship rumours. However, ASAP quickly put an end to the rumours at the time, telling Distractify, “I don’t even look at her in that manner. She’s hot, but I’m fine.”

The couple attends the British Fashion Awards together on December 2, 2019.

Rihanna and ASAP appeared together on the red carpet at the British Fashion Awards, but not as a couple.

Rihanna thanked ASAP for supporting her Fenty business in an Instagram post from the event, stating in the caption, “And thank you so much, @asaprocky, for representing us on the red carpet and for always being so supportive of @Fenty!

Rihanna and ASAP are supposedly dating as of January 29, 2020.

For seven years after rumours first surfaced in 2013, sources suggest that Rihanna and ASAP Rocky are dating, following her breakup from Hassan Jameel, with whom she’d been in a relationship for almost three years.

At the time, a source commented on the couple’s vacation to New York, telling The Sun, “During their trip to New York, they shared a hotel suite.

“However, Rihanna is hesitant to call it because it comes so soon after Hassan. [However], they’re enjoying one other’s company and taking things slowly because it’s still early.”

The insider went on, “It’s quite informal between them, and she’s not thinking about a future with Rocky. She’s a freshly single woman having a good time.”

Ri and ASAP fuel further romance rumours after being seen leaving The Nice Guy restaurant in Los Angeles in the early hours of the morning.

Ri and ASAP are seen out for dinner with pals on November 30, 2020, sparking new dating rumours.

Almost a year after romance rumours first surfaced, new rumours are sparked by a new set of insider information and a group supper.

First, according to Page Six, the couple was photographed out to dinner with friends on November 28th at The Beatrice Inn in New York, seated quietly behind a curtain.

Then, on November 30, People reports that Rihanna and ASAP are reportedly dating after a source revealed to the publication that the longtime friends had become a pair.

Rihanna and ASAP spend Christmas together in Barbados on December 28, 2020.

Though Rihanna and ASAP have yet to publicly comment on their rumoured relationship, things start to appear official when the couple spends Christmas together in Barbados.

The duo was photographed together in Rihanna’s home country of Barbados, where the rapper is claimed to have met the singer’s parents.

At the time, a source told People, “The couple, who were wearing face masks, were seen spending Christmas Eve together on their way to a Catamaran sunset sail while on holiday in her native Barbados.

“Rihanna has been in Barbados since [last] Thursday… ASAP joined her and they are celebrating Christmas with Rihanna’s family.”

When asked about their relationship, ASAP gushes over Rihanna in an interview with GQ, referring to the singer as “the love of my life.” He then addressed her as “my lady.”

When asked why he likes committed relationships over dating, ASAP explained, “[It’s] a lot better. It’s a whole lot better when you’ve got the One. She is probably equivalent to a million of the others. I believe that when you know, you know. She’s the Only One.”

When they brought up Rihanna, the rapper “begins grinning like a teenager whose crush just accepted his prom invite,” according to the interviewer.

He also mentioned if he’d like to be a father, saying, “If that’s in my destiny, I’m all for it. Nah, but I think I’d be a great, remarkable, all-around amazing father.

“I’d have a very cool kid. Extremely, “He said this before admitting that he did, in fact, spend Christmas with Rih’s family in Barbados.

Rihanna and ASAP Rocky stand on the Met Gala red carpet together on September 13, 2021.

Rihanna and ASAP have just made their first red carpet outing as a pair! The couple looked charmingly loved up as they posed on the Met Gala red carpet, with ASAP leaning in to kiss Rih on the cheek.

And what about their outfits? Amazing.

Rihanna gives ASAP a cheeky look inside her sex life on September 22, 2021.

Rihanna has revealed a not-so-subtle glimpse into her sex life with ASAP Rocky, and her list of requirements is very straightforward.

Rihanna had to hold back her chuckle when asked what gets her on during an interview with E! News Daily Pop, slowly responding, “I enjoy incense, cannabis, fragrance, and a little bit of hard work.”

The host of the broadcast answered, stating, “Oh, your man has to work for it? He’s not going to receive this for free.” Rihanna simply replied, “OK, OK,” before busting out laughing.

So there you have it.

While she didn’t specifically mention ASAP, the couple has been very vocal about their connection recently, so it’s safe to assume ASAP is involved here as well.

We adore them together.