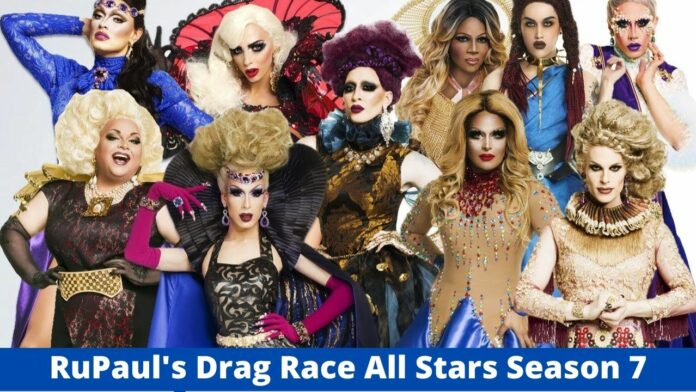 RuPaul’s Drag Race All-Stars is an American reality show that is a spin-off of RuPaul’s Drag Race, created by World of Wonder for Logo TV and then VH1. The show debuted on Logo TV on October 22, 2012, before moving to VH1. On February 20, 2020, the show’s official Twitter account revealed that the fifth season would premiere on Showtime on June 5, 2020. Following the cast announcement on May 8, 2020, producers confirmed that the show would continue to air on VH1 rather than Showtime due to “various schedule and programming issues” prompted by the COVID-19 pandemic.  On February 24, 2021, Paramount+ confirmed through Twitter that the series’ sixth season would be moved to the streaming service.

The show follows RuPaul as she invites former queens who have gone on to have the most successful careers after leaving the original show. RuPaul reprises his role as host, mentor, and chief judge for this series, in which participants face new challenges each week, just as he did on the first program. RuPaul’s Drag Race has a panel of judges that analyze participants’ progress during the race, including RuPaul, Michelle Visage, Carson Kressley, and Ross Mathews, as well as a slew of additional guests judges. The winner of RuPaul’s Drag Race All Stars receives $100,000 and a year’s supply of Anastasia Beverly Hills cosmetics, and the queens compete for a place in the Drag Race Hall of Fame, which has already inducted Chad Michaels, Alaska Thunderfuck, Trixie Mattel, Monét X Change, Trinity the Tuck, Shea Couleé, and Kylie Sonique Love. The inaugural season of RuPaul’s Drag Race All-Stars featured a sister show, RuPaul’s Drag Race All Stars: Untucked, which returned for Season 5 and Season 6 after a three-season hiatus.

Seasons have several formats. During the inaugural season, the queens had to compete in two-person teams, each paired with another All-Star. From the second season onwards, the contestants would choose who they wanted to eliminate.

Now here’s everything you know about season 7 of RuPaul’s Drag Race all-stars,

When will Season 7 of RuPaul’s Drag Race All Stars premiere?

The show’s seventh season has not yet been greenlit as of press time, though there is widespread suspicion that it is presently filming (see below). We’ll have to speculate about when — and if — Season 7 will be released without an official statement from Paramount+ or production company World of Wonder.

On August 20, 2020, VH1 revived “RuPaul’s Drag Race All Stars” (per TV Line). On June 22, 2021, the first episode was released on Paramount+. That implies a new season of the show took just over a year to make. If Paramount+ picks up “RuPaul’s Drag Race All Stars” for Season 7 tomorrow, viewers won’t see the seventh season until the early fall or late summer of 2022, at the earliest. It’ll be a lengthy wait, but Mama Ru will make it worthwhile for supporters.

Who will appear in Season 7 of RuPaul’s Drag Race All-Stars?

“All Winners” is the reported theme for the seventh season of “RuPaul’s Drag Race All-Stars,” according to the subreddit r/AllSpoiledDragRace. Winners from previous seasons are rumored to be contending for the title once more. Fans of the subreddit examined the social media accounts of queens who had won their seasons and noticed who had gone radio silent during the show’s supposed filming period, which began in late June and came to this conclusion collectively.

Jaida Essence Hall, Jinkx Monsoon, Monét X Change, Raja, Shea Couleé, Trinity the Tuck, The Vivienne (winner of RuPaul’s Drag Race UK’s first season), and Yvie Oddly are all possible possibilities for Season 7 of All-Stars, according to the above thread. But, of course, all of this is just wild supposition at the time. “Drag Race All Stars” hasn’t even been renewed for a seventh season on Paramount+. So, for the time being, let’s just call these casting notes harmless (but well-researched) speculation.

RuPaul will emcee and judge the seventh season, and usual panel members Michelle Visage, Ross Mathews, and Carson Kressley are also expected to return to the judges’ table. There will also be a variety of interesting guest judges.

On RuPaul’s Drag Race All Stars Season 7, what kind of challenges can we expect?

As of press time, no challenges for the season had been announced.

We can, however, look back at previous seasons to see what kind of weekly challenges they had and predict what we might see in Season 7.

Traditionally, each season of “Drag Race All Stars” has included a group singing task, a “rusical,” in which the queens must perform in a musical based on a popular entertainer, a period in pop culture “herstory,” or RuPaul’s life, and a commercial-related competition. “The Snatch Game,” which sees the queens doing celebrity impersonations while playing a variation of the classic 1970s game show “The Match Game,” is another hallmark game on both seasons of “Drag Race” and “Drag Race All-Stars.”

Every week, the queens will be required to create a new runway appearance that is tailored to a specific theme. The performance has featured a wide range of categories over the years, from classic drag ball looks to requiring the queens to dress up as talking, singing ships. The two queens with the worst luck will be asked to “lip sync for their legacy” as the last chance to please RuPaul and stay in the game. Should the program be renewed and speculations about the cast prove to be genuine, expect some twists and turns in this special season of All-Stars.