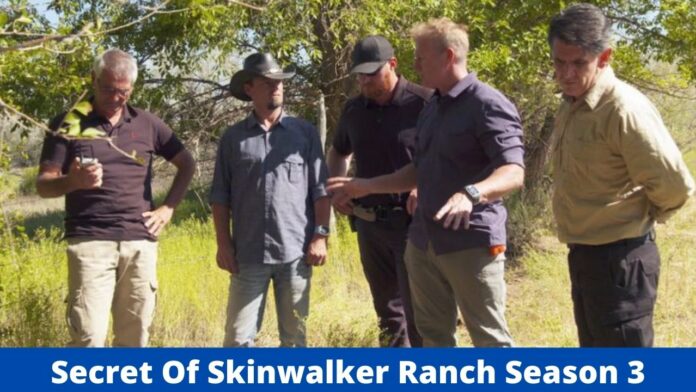 Will there be a third season of The Secret of Skinwalker Ranch on History? Since its premiere in 2020, the TV show has been extremely successful, and it thematically complements the network’s regular hit The Curse of Oak Island. The Secret of Skinwalker Ranch, on the other hand, is less about hidden treasures and more about ghostly activity in the American Southwest.

Dr. Travis Taylor investigates a mysterious parcel of land near Ballard, Utah, in The Secret of Skinwalker Ranch. He learns about Skinwalker Ranch’s cultural past, particularly its links to Native American legends. Taylor also investigates confidential government testing undertaken in the 1990s in partnership with Robert Bigelow, a former landowner. The History show investigates why there is so much paranormal activity at Skinwalker Ranch and provides many scientific theories regarding a wormhole that may conceivably allow non-human species to travel between Earth and another, unexplained dimension.

The season 2 episode “Laser Focused” of The Secret of Skinwalker Ranch focuses significantly on the wormhole concept and offers scientific data that supports Taylor’s theories concerning paranormal horror stories. However, much like The Curse of Oak Island, a total understanding of the fundamental puzzles is extremely hard to obtain. This, incidentally, allows for a multi-season story to be told over multiple years.

Here’s everything we know about season 3 of The Secret of Skinwalker Ranch.

Season 3 Renewal of The Secret Of Skinwalker Ranch:

What Is The Secret of Skinwalker Ranch About?

The film “The Secret of Skinwalker Ranch” follows a group of scientists and experts as they investigate the famed 512-acre property in Utah’s Uinta Basin. They try to uncover the truth behind more than 200 years of riddles, including UFO sightings, paranormal occurrences, animal mutilations, and Native American traditions about a shape-shifting entity known simply as “The Skinwalker.”

HISTORY is getting full, unparalleled access to Skinwalker Ranch, one of the most infamous and hidden centers of paranormal and UFO-related phenomena on the planet.

The series will feature a team of scientists and experts conducting a daring and thorough search of this infamous 512-acre property located in Utah’s Uinta Basin in an attempt to find out the “who,” “what?” and “why?” behind more than 200 years of UFO SIGHTINGS, bizarre animal mutilations, and paranormal-related mysteries. It will be anchored by never-before-seen footage of the ranch and what it contains.

The team will use cutting-edge equipment such as lasers and ground-penetrating radar, as well as drone thermography and other methods, to apply rigorous science and produce stunning discoveries while going further and risking more than anybody else on the ranch has done before.

Skinwalker Ranch and the surrounding area have been dubbed “UFO Alley” since the 1950s, with several anomalous events and odd activities attracting worldwide media interest. Since then, the area has been the subject of decades of research, some of which have been funded secretly by the government. Robert Bigelow, a millionaire businessman, and UFO enthusiast bought the ranch in 1996 and utilized it to perform his own studies into the ranch’s and its otherworldly links.

His findings were never made available to the general population. The property was sold three years ago to a new owner, who is now guiding this team in a new investigation and allowing television cameras to film their horrifying discoveries for the first time in history.

In the United States, the final episode of the series was released on July 13, 2021.

Season 3 Trailer for The Secret of Skinwalker Ranch

There is currently no official season 3 trailer available. We’re still waiting for History to make an announcement. So far, the following promo/trailer has been released on press releases and social media accounts: