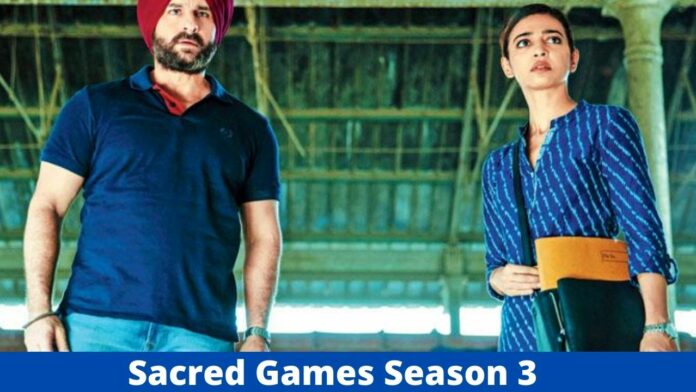 Sacred Games, a Netflix criminal thriller, is based on Vikram Chandra’s 2006 novel of the same name and was adapted for television by Varun Grover, Smita Singh, and Vasant Nath. The series (via Business Insider) is the first Netflix original to originate from India, and it has proven to be a successful decision thus far, offering wider audience access to Indian culture outside of Bollywood films.

The criminal drama depicts Sartaj Singh (Saif Ali Khan), a Mumbai police officer who is tasked with protecting the entire city from calamity after receiving a call from gangster Ganesh Gaitonde (Nawazuddin Siddiqui). The series, which has gotten generally excellent reviews (it has a 76 percent Tomatometer and an 83 percent audience score on Rotten Tomatoes), has so far released two seasons that may be binge-watched. Because the season 2 finale ended on a cliffhanger, fans are naturally curious about the possibility of a third season – here’s what we know so far.

When will the third season be released?

Netflix has not announced whether or not Sacred Games will be renewed for a third season as of yet. Because the show has already used all of its source material with Chandra’s book, it appears that it might go either way, but the second season did end on a cliffhanger, which could imply that there’s more to come. Nawazuddin Siddiqui, who portrays one of the main characters, has spoken out about the situation, stating that he does not expect a third season would be produced. He noted in an interview, “Everything that needed to be said about the first novel has already been spoken. In Vikram Chandra’s novel, there is nothing more to put in Season 3.”

While this announcement may come as a shock to the show’s many fans, it has yet to be confirmed by Netflix, and the streaming site has the last word. It’s possible that Siddiqui was speculating or that his ideas altered subsequently, but there’s no way of knowing for sure until Netflix makes an announcement.

The second season was released in August of 2019, which seems like an excessively long time to go without hearing about the third season. The global pandemic of 2020, on the other hand, disrupted nearly every show and film in creation, causing countless delays and postponements, so the long wait since season 2’s premiere isn’t necessarily indicative of anything substantial.

Who will be on Season 3’s cast?

Any season of Sacred Games would be incomplete without its two main characters, Sartaj Singh and Ganesh Gaitonde, played by Saif Ali Khan and Nawazuddin Siddiqui, respectively. These two are the only two cast members that have been credited as main characters in both seasons, so we can probably expect more of the same in any third season.
Some of the characters didn’t make it out alive at the end of season 2 in this crime-filled and action-packed story. In reality, some of the deaths were startling, such as that of Anjali Mathur (Radhika Apte), a research and analytical officer who was shot by Murad Malcolm (Luke Kenny) while on a case. Majid Khan (Aamir Bashir) was also assassinated by Shahid Khan (Ranvir Shorey) just as he and Sartaj were about to discover the explosives they were looking for. Khanna Guruji (Pankaj Tripathi), the cult leader, was also murdered by Ganesh.

Key characters like Batya Abelman (Kalki Koechlin) and Suleiman Isa (Saurabh Sachdeva) were fortunate enough to avoid death and will most likely return in a future season.

The Plot of season 3 of Sacred Games:

Officers Sartaj and Majid located the nuclear device before it went off at the end of season 2, but Majid was shot by Shahid just as they made the discovery. After Shahid refused to give over the pattern used as a password to unlock the device, Sartaj shot and killed him while the bomb was ticking down. With time running out, everyone except Sartaj accepted that the device would go off — despite his continued attempts to break the password. Sartaj worked out the password, which was “the contour of the Radcliffe Line or the international border between India and Pakistan during the partition of India,” according to Fansided. Finally, the shot fades out before it is evident whether or not the device detonated.

If the show gets renewed for a third season, the plot will most likely resume up where this cliffhanger ended, revealing whether or not the password worked. If the show proceeded, it’s likely that the password was successfully cracked, and the plot could shift to the aftermath of the incident. The first two seasons covered the contents of the novel on which the program is based, giving the show’s writers unlimited creative control over where the tale goes next.