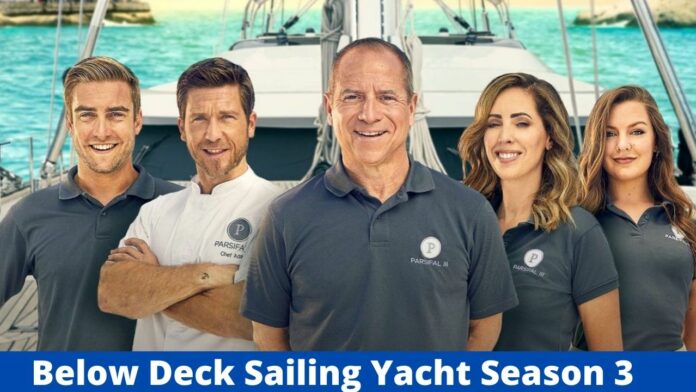 Was Season 3 of Below Deck Sailing Yacht canceled or renewed?

When will it premiere on Bravo?

Who will be back for the upcoming season?

We’ve summed up everything we know about the upcoming season in this post.

What is the purpose of the Below Deck Sailing Yacht?

Captain Glenn Shephard and his crew set off in a luxury sailing vessel to explore the Ionian Sea’s crystal-clear seas. Working aboard a sailing yacht presents new difficulties to these young, beautiful, and adventurous sailors who are willing to work hard and play even harder.

This season, Gary and Daisy leave their tumultuous relationship behind in order to take their relationship to new heights. Meanwhile, Daisy’s aim for a calm sailing experience with her crew is jeopardized as resentments between the surface of the stew, threatening the boat’s hierarchy. Chef Marcos strives for the same level of excellence in the galley that he is accustomed to on land, but he is pushed to his limits in order to maintain it at sea. This is Parsifal III’s most dramatic charter season yet, with a twisted love pentagon, a litany of gory injuries, and a perilous, potentially vessel-crippling tragedy that threatens the safety of everyone on board.

To meet the rest of the Below Deck Sailing Yacht season 3 crew, scroll down:

Glenn returns as captain, which he has held

Glenn is calm “until his limitations are tested” by others, according to his Bravo bio. When the boat nearly runs aground overnight, the trailer suggests that the skipper may have multiple fires to put out onboard.

Returns to the show after previously appearing in season 2 as a chief stew.

“Daisy has a lot to live up to when she returns to Parsifal III following a successful past season,” her profile says. “You can always count on her to give you a piece of her mind and let her hair down to have a good time.”

What is the process of casting for Below Deck Sailing Yacht?

Sydney Zaruba will not be returning for Season 3 of “Below Deck Sailing Yacht.” She said on the Dear Diary, You’re Effed podcast, “If I return, I won’t be returning this season, I don’t believe, because I already have a job. But I believe I would have to be up for a promotion or a better job in order to return.”

Work conflicts may arise, but how are decisions made about who will return for filming and who will not?

Jill Goslicky, the show’s executive producer, answered that topic in a Reddit AMA (Ask Me Anything). “It’s a difficult decision that we (the producers), the Captain, and Bravo have to make,” she stated. “Much of it is influenced by what is going on in that person’s life at the time. Do they have convincing reasons to continue their journey in the show? You’ve probably seen examples of cast members taking a season off and then returning. This is due to the fact that the time has come for them to return.”