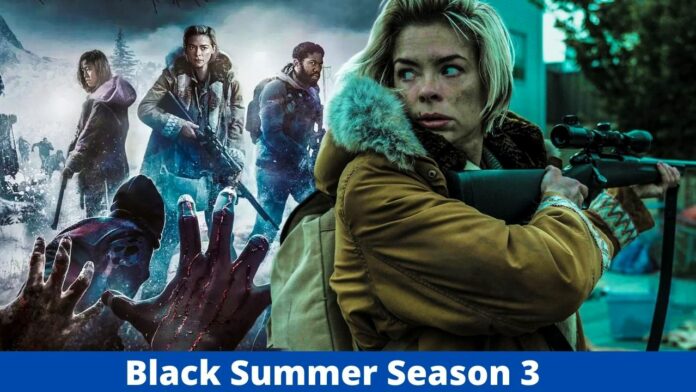 Karl Schaefer and John Hyams created the American streaming television series, Black Summer. On April 11, 2019, Netflix launched the first season, which consisted of eight episodes. The series is produced by The Asylum, the same company that brought you Z Nation, and is mostly written and directed by Hyams, with extra episodes written and directed by Abram Cox. Rose, a mother who is separated from her daughter during the first and most dreadful days of a zombie apocalypse, is played by Jaime King. The series received a mixed response from critics. Many of the scenes were shot in and around Calgary, Alberta, Canada.

Will there be a third season of ‘Black Summer’?

We’re still waiting for Netflix to confirm a renewal, but based on how Season 2 concluded, we can expect a third season. The second season of ‘Black Summer’ left a lot of questions unanswered, implying that the show’s makers are optimistic that Netflix would give them another season to complete the story.

Netflix usually waits at least a month after a show’s premiere before renewing it. Season 3 of ‘Black Summer’ is taking longer to renew than prior seasons, although it’s worth noting that the previous season took months to become formally announced. As a result, we remain optimistic that Season 3 will be released at some time. The second season of ‘Black Summer’ premiered on June 17, 2021, and no renewal announcement for season 3 has been made as of January 2021. Once the show has been renewed, we will immediately update this space.

Based on that timeframe, a third season of ‘Black Summer’ is unlikely to arrive until late 2022 or 2023 at the earliest. Hopefully, as the Covid-19 restrictions are gradually eased, the production will run smoothly and ‘Black Summer’ will return sooner than the previous season.

What Is The Plot Of Season 3 Of ‘Black Summer’?

Unlike the first season, which seemed to have a clear conclusion, the second season left a number of unresolved ends. These cliffhangers could be a terrific way to start season 3 of ‘Black Summer.’

The survivors’ journey to the airstrip was the centerpiece of the second season. They hope to board the mystery plane that drops supplies throughout the neighborhood and travel to a safe location.

Among the survivors that arrived at the airstrip, only Sun was able to board the plane. What is the plane’s destination? Will Sun ever find a place where he isn’t infected? To discover out, we’ll have to wait until the next season. Regrettably, the plane is only a band-aid for the undead scourge. We’ve heard that the pilot needs to refuel, and who knows what obstacles they’ll face once they arrive.

Rose’s fate is another mystery that has to be solved. After injuring her leg, she was unable to board the plane. Rather than boarding the plane and leaving her behind, Anna chose to flee back to her mother. Anna may be willing to go to any length to stay alive, but Rose is losing interest. Rose, on the other hand, has legitimate worries. Where will they go now that flying is out of the question? The Ski-Lodge appears to be their best remaining option. It’s unclear whether Anna elected to leave her disgruntled mother behind as she boards a car.

The fight for survival will go on. Netflix should probably renew ‘Black Summer’ for a third season shortly.

Who is in the third season of Black Summer’s cast?

It doesn’t take long for a character to appear and then vanish in this post-apocalyptic film. Although the number of deaths is frighteningly high, a recurring cast of characters appears each season.

Given the volatile and unpredictable nature of the events in Black Summer, it’s difficult to anticipate which characters will survive the season.

When Can We See the Official Trailer for ‘Black Summer’ Season 3?

First and foremost, we must obtain a formal renewal. The series will next go through production and editing before Netflix can release a trailer, which will happen around a month before the new season premieres. It’s possible that the entire process will take more than a year. We’ll keep an eye on the latest developments and update this post as needed. Return to this link at any time. Let’s just enjoy the season 2 trailer for now.