Joey Defrancesco, the munificent Jazz Organist, saxophonist, and trumpeter of America died on...
HomeEntertainmentMarriage or Mortgage... 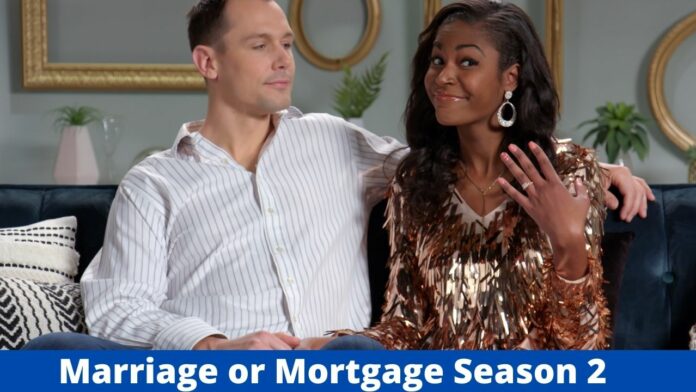 Weddings are a wonderful topic to think about, and many people enjoy watching wedding planning shows on television. Netflix is known for dating shows like Love Is Blind, as well as a new series that follows couples as they choose a house or a wedding.

People despise marriage and mortgages because it seems wasteful to spend thousands of dollars on a wedding when that money could be put into a down payment on a home.

Many people have been discussing the premise of the show, and now they want to know if there will be any more episodes in the future. Let’s take a look at what we’ve learned thus far.

Is there a chance for a Season 2 renewal?

Fans want to know if Marriage or Mortgage is real and if the streaming service has renewed it for a second season.

Marriage or Mortgage has not been renewed for a second season, and there are no indications as to when it could be.

It’s fascinating to discover more about Netflix’s decision-making process when it comes to canceling or renewing series.

Netflix considers the audience while selecting a show, which makes sense.

Cindy Holland, Netflix’s vice president of original programming, told ign.com, “The most important thing for us to consider is whether or not we have enough viewers to justify the cost of the series. We also consider other factors, such as how popular a title is among fans and how social it is. There are many other things we look at that you may see out in the world as well. However, we are methodical and thoughtful, and there are many factors that influence our decision.”

According to TV Line, Netflix looks at who finishes a season of a TV show up to a month after it’s first available for viewing, according to a Vulture report from 2018.

While Marriage or Mortgage does not appear to be as well-known as some other Netflix reality shows, it has been discussed in the media.

Many fans of the show have discussed the show’s idea as well as the couples’ decisions in Reddit posts.

Emily and Braxton, who appeared in the episode “Out Of The Friendzone,” were mentioned by one viewer. They hadn’t yet moved in together and decided on a wedding. “I was horrified watching it, especially the young couple who elected to have a wedding and then had to go back to living separately with their respective parents!” wrote one viewer. Others in the same thread were taken aback by the fact that some couples prefer a wedding to a home.

When is the second season set to premiere?

Fans were enthralled by the show’s first season, which premiered in March. The relator and wedding planner behind the magic, on the other hand, is more optimistic about the show’s return than anyone else. Nichole Holmes, a realtor, and Sarah Miller, a wedding planner, both enjoyed their time on set.

Holmes discussed the possibility of a second season of the show in an interview with PureWow. “We don’t know,” Holmes continued, “but hopefully Netflix hears this because we would love it.” “We both had such a blast doing what we love every single day and making people happy,” Holmes added.

In Season 2, who will be the couples?

Of course, there is presently no word on any potential pairings due to the lack of information on a possible season 2. Season 1 featured a diverse range of couples, including LGBTQ+ couples, who aren’t seen on reality series very often.

Women’s Health Magazine recently checked in with the couples from Season 1 to see how their decision to marry or buy a house has changed their lives so far. The wedding won out over the house for Alex and Whitney, who appeared in the episode “Two Nurses in Love.” “We wanted to show our love to the world. The wedding ended up being more important to us at the time of filming. We could have chosen a wedding a hundred times over, but we know the house would have been a wise investment as well “Whitney spoke to Women’s Health about it.

Denise and Nick from “Adopting New Traditions,” on the other hand, chose to stay with the house. “We’d been renting for quite a while,” Denise said of their decision. “Having something that is ours that is tangible permanently — not just one day — is fantastic.”