Joey Defrancesco, the munificent Jazz Organist, saxophonist, and trumpeter of America died on...
HomeEntertainmentLiving With Yourself... 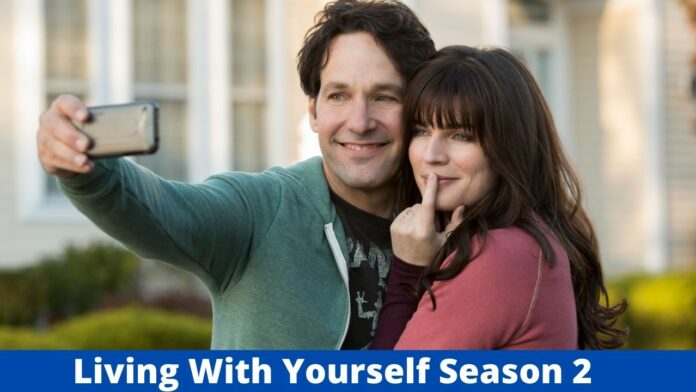 Living with Yourself, a Netflix comedy with eight episodes, has twice the amount of Paul Rudd as any other show. Rudd’s two-timing performance as down-in-the-dumps Miles and his high-on-life clone, New Miles, wowed critics and audiences alike.

Miles is cloned in the midst of his existential crisis, forcing him to confront what it means to, well, live with oneself, thanks to a weird spa treatment. His clone has his memories and body, but he’s a brighter, more upbeat version of Miles who just seems to be better at living. The sitcom turns the painful possibility of admitting your imperfections into an emotionally based comedy with the help of their wife Kate (Aisling Bea).

Season 1 of 2019 ended with Kate announcing her pregnancy and the mystery surrounding Miles’ paternity. The three of them have a group hug as they rejoice over the good news while also acknowledging that they are in an unusual situation. “Where do we go from here?” they’re asking, as are the audience. Everything we know about Season 2 is shown below.

When will the second season of Living with Yourself be released?

Netflix has yet to decide whether or not to renew Living with Yourself for a second season. As creator Timothy Greenberg told The Hollywood Reporter, “The series was always meant to be a fulfilling single season.” “Paul had never worked on television before. He was apprehensive about being involved in an open-ended project and portraying a character for the rest of his life.” However, Greenberg added that this doesn’t mean a second season is off the table.

With an A-list celebrity at its heart twice, it’s feasible that the show’s renewal is contingent on Rudd’s willingness to return for a second season. It’s a lot of effort to play numerous personalities on the same TV show, and he could be busy with the third Ant-Man film and another TV show, The Shrink Next Door, in the near future. “I only have so much bandwidth — as do we all!” Rudd told THR of a second season. “I thought it was a lyrical stroke to make this the last moment of the season of the show,” he didn’t shoot it down, but he also didn’t confirm it.

What is the plot of the second season of Living with Yourself?

Fans may rest assured that if Netflix decides to continue Living with Yourself, Timothy Greenberg has lots of ideas for it. Season 1 almost concluded with a nasty cliffhanger concerning someone other than the primary characters, he told THR, but it was rejected in favour of a satisfactory conclusion focusing on the show’s heart. He did, however, say that “Part of me still yearns for the final scene to take a dark turn and show us something terrible that happened. I could always put that at the start of a second season if we have one. I’ve got at least six ideas for how to start a second season.”

A second season would not only continue to explore the darker aspects of cloning, but it would also continue to unravel the main topic. “In terms of ‘What does living with oneself mean?’ I feel like we’ve just scratched the surface.” Greenberg remarked. He pointed out that the two Miles’ immediate dilemma has been solved, thus the storey will have to move on.

Living with Yourself is already a delicious treat structured around a quirky but realistic midlife crisis, and a second season may be just as wonderful, thanks to one of Paul Rudd’s best on-screen performances. For the time being, we’ll have to wait and see what the series’ fate will be.

Living with Yourself Season 2 cast:

Paul Rudd will reprise his role as Miles Elliot and his clone, with the following essential cast members joining him:

Will the second season of Living With Yourself be as interesting and compelling as the first?

A hug was shared by Kate, Miles, and the clone at the end of the first season. Is this an indication that they’re ready to start a family? Isn’t it, though, a little unsettling?

It would be amazing if we could get all of the answers in Season 2. If the show is renewed, it would be fantastic to see Miles’ clone and replica work together to raise the child in season 2.

What Do You Think of the Living With Yourself Season 2 Trailer?

Although no release date for Living with Yourself Season 2 has been set, it will most likely take Netflix some time to complete. Lets watch the trailer of season 1 below,