Dexter New Blood Season 2: Are We Getting It or Not? Know Here! 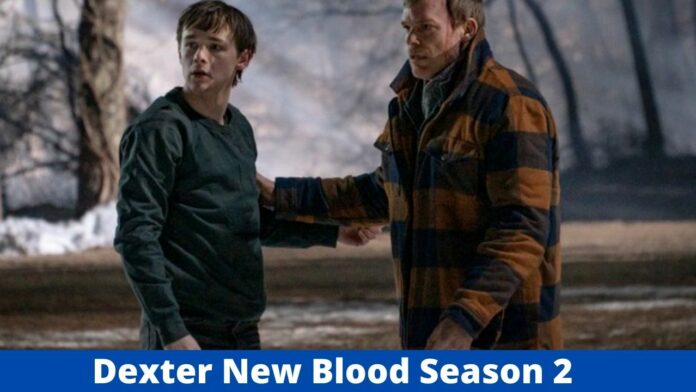 Dexter: New Blood is a Showtime crime drama mystery miniseries conceived by original series showrunner Clyde Phillips and directed by Marcos Siega is a continuation of the series Dexter. New cast members Jack Alcott, Julia Jones, Johnny Sequoyah, Alano Miller, and Clancy Brown join Michael C. Hall and Jennifer Carpenter in their roles as Dexter and Debra Morgan, respectively. The plot takes place ten years after the events of the original series finale “Remember the Monsters?” from 2013, which aired on television. On November 7, 2021, it premiered on Showtime.

When one door closes, another opens, as the old adage goes. Dexter: New Blood, on the other hand, appears to have taken that to heart.

For ten years, the serial killer with a conscience believed he had gotten away with murder. Even living in the beautiful hamlet of Iron Lake wasn’t enough to keep the Dark Passenger from haunting him.

While it appears like the show’s future is pretty much sealed, Dexter has proven to be a survivor on several occasions, and he may now return in a different guise.

Do you have any questions regarding what we’re talking about? Everything you need to know about Season 2 and beyond is right here.

The second season of Dexter: New Blood, and when will it premiere?

If you watched the season finale, you’d believe the answer was “no,” as Dexter – aka Jim Lindsay – died after his backstory was revealed.

Yes, after a fight with his son, Harrison, the character memorably played by Michael C Hall has slid off this mortal coil.

Harrison turned a gun on his father when he failed to follow his own rules about who should and shouldn’t live after the unhappy duo bonded over their common dark side and need to kill (“born in blood,” as Dexter would remark).

The net was closing in around Dexter anyway, with Miami Metro’s Angel finally learning his old blood-spatter analyst pal was alive and well, and most likely the mystery Bay Harbour Butcher.

Despite the main character’s death, the show’s producers have already confirmed plans for a second season. While it hasn’t received official approval yet, details on what it would contain can be found below.

Dexter New Blood – Who will be in the cast of season 2?

If season two goes ahead (though, as we’ve already stated, no formal announcements have been made), the focus of New Blood will move from Dexter to his son Harrison, played by Jack Alcott.

The last time we saw the serial killer’s teenage kid, he was on the run after killing his father. After finding Harrison with the body, police chief Angela Bishop (Julia Jones) accepted responsibility for Dexter’s death, freeing him to begin a new life free of the burden of his father’s murder.

But it’s unclear where Harrison will go, what he’ll do with the lessons he’s learned from his father’s moral killer code, and who will join the cast. He has no living relatives that we are aware of. He had the freedom to go wherever he pleased.

In season four of the original Dexter, his biological mother died. Between the original series and New Blood, we found that Hannah, Dexter’s girlfriend who left with Harrison for a better life in the season 8 finale, died off-screen of cancer. It’s the only reason Harrison bothered to look for Dexter in the first place.

Isn’t his father also dead now? For this severely distressed adolescent, the sky is literally the limit.

Clyde Phillips, the showrunner, has stated that he would be open to a second season; all that remains is for Showtime in the United States to give them the green light.

In an interview with Deadline, he clarified that this would mean that Harrison would continue to play the lead role.

“Harrison is such a complex guy, and he carries the seeds of the dark passenger within him,” he explained. “He’s a capable individual. Look at Harrison’s takedown of Dexter at the end; he knows he has to kill this man.”

“Dexter had never considered it before. Dexter was just killing evil guys because it was part of his code.”

Is there a trailer for season 2 of Dexter: New Blood?

Unfortunately, because season two has yet to be confirmed, it’s unlikely that we’ll see a teaser or new footage for anything very soon.

Check back in and we’ll let you know as soon as further information becomes available.