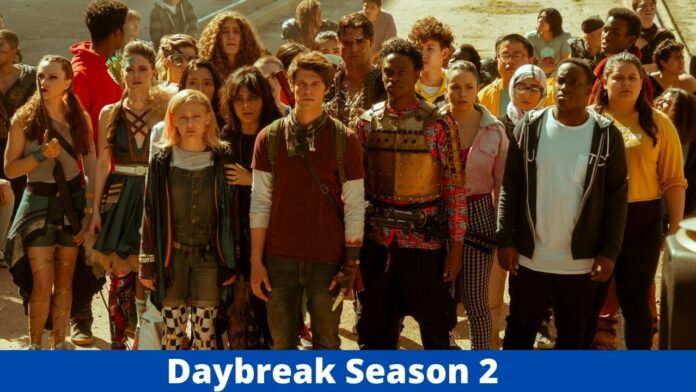 This article on Season 2 of the streaming series Daybreak was first written on  22 JAN after the show was canceled. Continue reading for the original article, which has been updated to reflect the most recent developments in this field.

Daybreak, which was released just before Halloween in 2019, was a smash hit for Netflix. The show was a post-apocalyptic high-school dramedy that combined elements of The Breakfast Club and Mad Max. It was met with immediate critical praise, and fans awaited the news of a second season with bated breath. Regrettably, that wonderful news never arrived. Here’s what we know regarding the cancellation of the show.

Daybreak, a fantastic series, has received a request for a second season on Netflix. The fans of the first season of this series were eagerly anticipating the second season.

However, Netflix’s official announcement that season 2 of Daybreak will be canceled was not exciting.

NETFLIX ANNOUNCED THE RENEWAL OF DAYBREAK?

Unfortunately, the answer is no. In December 2019, just a few months after Season 1 ended, Netflix confirmed that Daybreak would not be renewed for a second season. Aron Coleite, one of the show’s co-creators, tweeted the news.

He wrote, “We learned last week that Daybreak will not return for a second season.” “We’re sorry we couldn’t share it with you sooner, but we’re pleased we got to hang out with all of you in these final few live-tweet sessions.” Thank you for picking up where we left off and running with it in all of your great, odd, monster ways, and for being such an integral part of this show and our experience creating it.”

“No one is more disappointed than we are that we won’t be able to share more of our journey with you,” he concluded. “However, we’re quite grateful to have gotten this far.”

WHAT COULD HAVE HAPPENED IN SEASON 2 OF DAYBREAK?

Season 2 would almost certainly have focused on the new societal dynamics created by Sam’s accession to the throne. Her ascension in the finale had a sinister ring to it, and it’s safe to say her rule wouldn’t have been exactly kind and just.

In terms of character development, the season would have required to focus on Josh coming to terms with the fact that his ideas about who Sam is are outdated and sexist — he only saw her as a damsel in distress, not her own person, as she put it. Josh would have to learn faster and better if he wants to survive the apocalypse.

Is Daybreak getting a second season?

Daybreak has not been renewed by Netflix. The first season will be the final season.

Stay tuned for the most up-to-date information about Daybreak season 2 with alphanewscall!