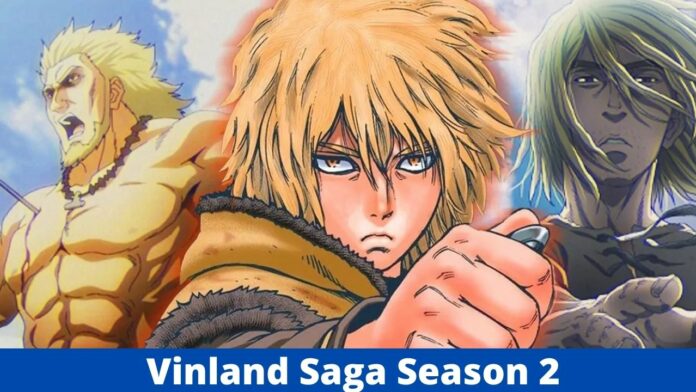 Season 2 of Vinland Saga is eagerly awaited by fans of the anime series. Read on to learn more about the series premiere date, cast, and other features.

Vinland Saga is an anime series that has earned a lot of praise from fans. It’s based on Makoto Yukimura’s manga, which he wrote and illustrated. The series is directed by Shuhei Yabuta. Yto Uemura, Shizuka Ishigami, Naoya Uchida, Hiroki Yasumoto, Kenichiro Matsuda, and Akio Tsuka provide the voices for the characters in this series. This anime series’ first season was released in 2019, and fans have been eagerly anticipating the second season’s release. The following are the details for Season 2 of the Vinland Saga.

Vinland Saga Season 2 has no set release date as of December 2021, even if it has been confirmed. The second season of Vinland Saga, however, is expected to be released in July 2022.

The plot of the Vinland Saga:

Young Thorfinn grew up hearing tales of old sailors who had traversed the seas and arrived at Vinland, the legendary land. It’s claimed to be pleasant and fertile, a place where fighting isn’t necessary—a far cry from the frigid village in Iceland where he was born, and certainly not his current existence as a mercenary. Now he lives in a war zone. “You have no enemies, nobody does,” his father reportedly told him. As Thorfinn grew older, he realized that nothing could be further from the truth.

With each passing year, the struggle between England and the Danes worsens. Death has become a way of life for the Viking mercenaries, and they are relishing every second of it. Allying with either side will result in a significant shift in power, and the Vikings are content to build a name for themselves and seize any prizes they can. Thorfinn must seek vengeance on Askeladd, the man who murdered his father, amid the mayhem. The Vikings only paradise seemed to be the ongoing era of war and death. Vinland Saga Season 2 does not have a release date as of December 2021.

The cast of the Vinland Saga Season 2:

The cast of “Vinland Saga” Season 2 will most likely be very similar to the cast of Season 1, with a few notable additions and subtractions. Given the events of Season 1’s finale, fans may be quite certain that actors like Naoya Uchida and Hiroki Yasumoto, who played Askeladd and Bjorn, respectively, have left the show (via IMDb). This does not take into consideration any possible retcons, time jumps, or dream sequences.

Aside from that, viewers can expect to see Yûto Uemura, Kenshô Ono, and Akiotsuka reprising their roles as Thorfinn, Canute, and Thorkell, respectively, in the following events of the series. The only true surprise in terms of the roster will be the several new characters fans can anticipate meeting in Season 2 of “Vinland Saga.” Season 2’s newcomers, on the other hand, will stay anonymous until any official announcements are made.

You can view the latest Vinland Saga season 2 trailer below, which was released in July 2021. The next trailer will be released on the official Vinland Saga Twitter account, and we will update this page.

It’s more of a teaser for the second season than a complete trailer. In the coming months, a new trailer should be available.