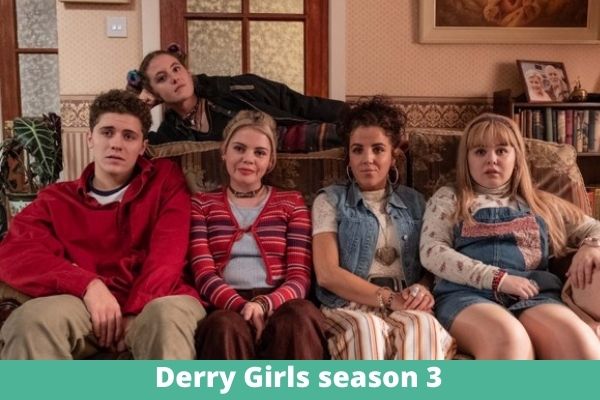 ‘Derry Girls,’ an adolescent drama set during the Troubles in Derry, Northern Ireland, follow Erin Quinn, her family, and her classmates at a Catholic high school.

Playwright Lisa McGee created the comedy, which deals with issues such as adolescence and sexuality. On January 4, 2018, Channel 4 debuted “Derry Girls.” After that, Netflix snatched it up and made it available on December 21, 2018.

There has been a lot of appreciation for the show’s depiction of adolescent girlhood and the uniquely Irish spirit. Fans of the program might identify with the girls’ struggles at Catholic school and their dysfunctional families, and the broader political upheavals they face.

What’s ahead now that the first two seasons have come to an end? Season 3? What’s going on? All the information you’ll ever need is right here!

Meanwhile, there is no official release date for the third and regrettably last season of Derry Girls. Fortunately, the beloved comedy series will be back in 2022 at the earliest.

C4 had to postpone the shooting of Derry Girls because of the Covid-19 outbreak, which delayed several other projects. Finally, according to Louisa Harland’s Instagram, we know that shooting has been done on the series, which means that the girls will be back on the air soon.

In Season 2, the group attends a concert, drinks wine, faces suspension, and attends prom. Erin’s heart is broken when Michelle nearly gets her pals to try hash scones.

Bill Clinton travels to Northern Ireland, and the Provisional IRA declares a truce. James decides to remain in Derry with the girls rather than heading back to London in the season finale.

Even as the quintet nears maturity, Season 3 is slated to dig further into their lives. Erin and James might develop feelings for one another. Politics in Northern Ireland may undergo significant shifts, and a cautious peace is possible.

Also read: Are You The One Season 4 Cast: Are They Still Together?

On the other hand, the disturbing riots of 1996 and 1997 may be addressed in the last season. To find out who they truly are and what they aspire to be, the Derry girls will have to confront new experiences boldly.

Nicola Coughlan has announced that she will reprise her role as Claire, but we anticipate the rest of the major characters to stay the same as well.

So, if that’s the case, we can expect to see Saoirse-Monica Jackson and Jamie-Lee O’Donnell return to portray Erin Quinn and Michelle Mallon, Louisa Harland, and Dylan Llewellyn play Orla McCool and James Maguire, as well as their respective families and supporting casts.

Lisa McGee, the show’s creator, said in a 2020 interview that she would love to cast Dara Briain in the third season.