Brawlhalla Season 5 released! everything you need to know 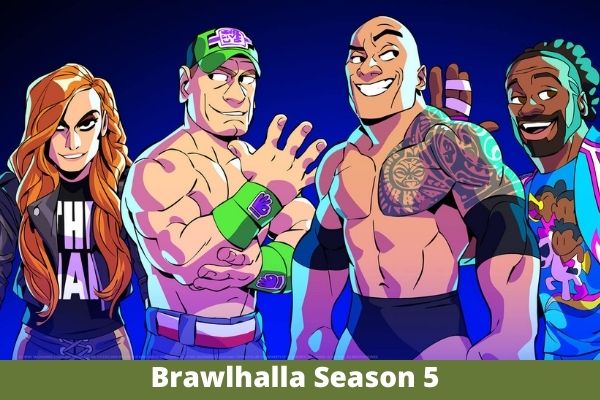 The free-to-play fighting game Brawlhalla was produced by Blue Mammoth Games and released by Ubisoft. At PAX East 2014, the game was demonstrated and entered into alpha that month.

Following an open beta in November 2015, the game was released in October 2017 to the general public.

Fifty-four playable characters dubbed “Legends” are available in the game, each with unique attributes, load-outs, and unlockable skins.

According to the Patch notes, season 4 of Brawlhalla finished on November 3, 2021. Season 5 of BP is expected to arrive in January or February of 2022 if past seasons’ release dates are any indication.

For the most part, the purpose of Brawlhalla’s game type is to knock your opponent off the stage, as in Splatoon 2. Damage to them repeatedly is a viable option. With each successive strike, the player’s health bar turns from white to crimson to black, indicating the extent of the damage they have taken.

Each pixel’s distance from red indicates how close the player is getting to being knocked out.

The player will lose a life if they are knocked off the stage. At the end of the game, whoever is still standing (with at least one life left) or whoever accumulates the most points takes the victory over their opponent.

It’s possible to play the game locally as well as online. Competitors may battle against one another in a one-on-one match to move up the rankings.

Additionally, they may team up with a friend to compete against other pairs in the basic stock line or a rotating string that showcases a new game style each season to improve their cooperative ranking.

Various casual modes are also available in Brawlhalla: 1v1 Strikeout, Experimental 1v1, and a highlighted mode of the week. Chaos ensues when four players go head to head for points in Free-For-All. Players in 1v1 Strikeout choose three characters to play for a single stock.

One-on-one testing of new features may be done in experimental 1v1. Custom games enable up to eight players per match, experimental maps, and region switching online and locally.

Clans may be formed with the help of your friends, and each clan has its hierarchy of ranks. There are no mobile versions of Clans. With every member’s input, a clan improves.

Brawlhalla’s controls are basic, and one-button special moves are available for all characters. It makes it easier for novice players to learn the game.

To attack, execute special techniques, pick up or throw weapons, and dodge, you’ll use a combination of the arrow keys and buttons on your keyboard. For keyboards and a wide range of game controllers, keys may be rebound.

Running and leaping are the primary movement for the game’s participants. Players may conduct rapid sideways dashes and dodges in the air or on the ground, horizontally or vertically.

You may also dodge right after an attack to maintain pressure on the opponent. After the player is in the air, any combination of leaps, directional air-dodging, a “gravity-cancel,” and “fast-falling” may be performed. Like Mega Man X, you may also grip the edge of a level like that in the game.

This feature allows players to pick up random gadgets and weapons that fall from the sky during a fight. It may be turned off in the ranked game types.

Its sprite is a sword, but it becomes the appropriate weapon for the tale when it is picked up. Each character in Brawlhalla has access to two of the game’s 13 weapons.

Using a rocket lance, you can go through the level more quickly. Hammer, cannon, and greatsword are just a few of the powerful weapons in the game. As far as damage is concerned, these weapons are all quite modest.

Should they be rendered defenseless, all characters have unarmed assaults. Various weapons and explosives are also used.

To disrupt the enemy’s actions or make it difficult for them to return to the stage, weapons may be hurled. In all, each character may use a total of six “signature” techniques, one for each of their three special moves per weapon.

Strength, Dexterity, Defense, and Speed are the four stats given to each character in the game. Using stances, characters’ strengths and weaknesses may be tweaked by shifting a point from one state to another, influencing how they’re played.