The Orville Season 3 released! everything you need to know 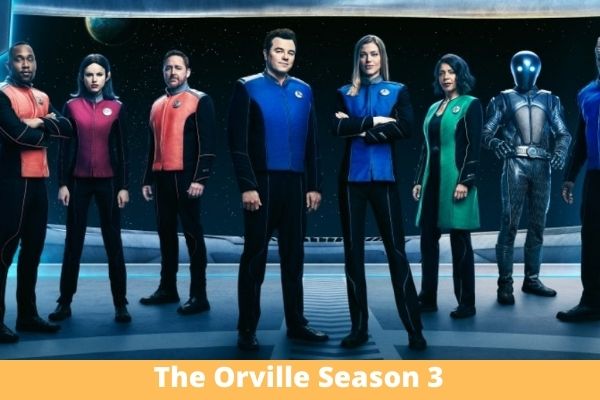 USS Orville, an exploding starship, focuses on Seth MacFarlane’s new series, ‘The Orville,’ which follows the spacecraft crew as they journey throughout the galaxy to study planets and civilizations.

The crew of the Orville, including Captain Ed Mercer and Commander Kelly Grayson, a separated couple, are the focus of the drama, which is set in the future. The crew’s contacts with various cultures provide the show’s narrative fodder.

For those who love science fiction but also want to laugh at it, “The Orville” is the perfect combination of the original and its parody. September 10, 2017, was the show’s debut date.

The critics didn’t like it in its first season, but the public adored it because of its novel approach to combining tragic and humorous components that worked.

The storyline of the second season received high recognition for its originality. Season 2 comes to a thrilling conclusion with an epic finale that leaves spectators spellbound. Get up to speed on everything we know about the third season as it got released on June 2, 2022.

Season 3 of The Orville completed filming in August of 2021 and was released on June 2, 2022, as Hulu confirmed earlier.

Season 3 of The Orville has a new title: The Orville: New Horizons, as revealed in the teaser. Part of Season 3’s delay is due to episodes being made. As the show progressed, MacFarlane claimed, it became increasingly difficult to complete and deliver episodes.

While trying to restore the original timeline, the crew erases Kelly’s memory to accomplish so in the season 2 finale of “The Orville.” The crew of the Orville is working to restore order in the galaxy after the Kaylon has taken over half of it, including the obliterated Earth.

When the team realizes that the only way to return to the previous timeline is by rectifying Kelly’s memory wipe, they acquire a critical protein.

They rescue Orville from the Mariana Trench and send Claire back to the past to erase Kelly’s memory. At long last, Claire has achieved her goal of re-establishing the chronology to its former state.

Things start lightheartedly in the show but quickly take a dark turn. In the second season finale, Kelly Grayson returns to the alternate timeline and has a falling out with Ed, causing a chain reaction.

The Orville crew is being held hostage by the Kaylons, a renegade faction of whom Isaac is a part. The Earth is on the verge of extinction.

When the going gets tough, the aliens known as Krill step up to the plate and save the day. John destroys the spacecraft in a last-ditch effort to transport Claire back in time.

Claire tends to go back in time and erase Kelly’s memories despite this. Fortunately, Kelly and Ed are reunited in the dying seconds of the second installment’s conclusion.

At first, Orville was designed so that the Union would not like it as much as the Starfleet of ‘Star Trek.’ Mercer and the crew will undoubtedly play major roles in the following season, even if the ship is destroyed at the end of the second season.

A homage to Philip Dick’s cult classic book, ‘Do Androids Dream of Electric Sheep?,’ the opening episode of the third season is titled “Electric Sheep.”

The Union’s reaction to Kaylons’ invasion will likely focus on the show’s third season opener, which will most likely start up where the second season ended. The Krill people and Mercer’s crew may enter into a pact.

The series, heavily influenced by the ‘Star Trek’ world, will explore further thought experiments on extraterrestrial and artificial life forms.

The connection between the Krill and the members of Orville might be explored in a new light in the third season since the species may be able to assist Orville in his battle against the Kaylon.

The crew of the Orville is likely to face fresh challenges, funny puzzles, mind-blowing fights, and social gatherings as they continue their explorations of new worlds.