Cancer campaigner and Podcaster Deborah James, whose frank account of living life with...
HomeEntertainmentMayor of Kingstown... 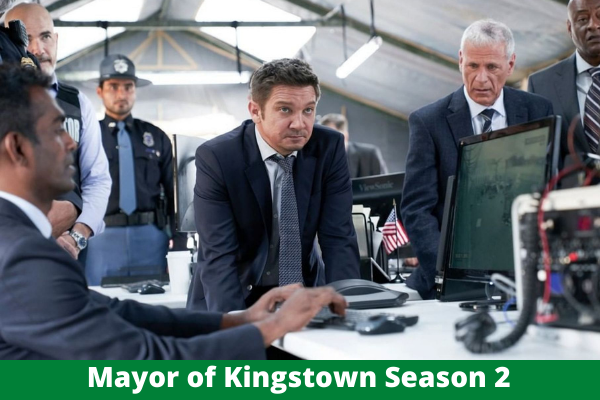 In ‘Mayor of Kingstown,’ a violent crime thriller created by Taylor Sheridan and Hugh Dillon, we follow Mike McLusky (Jeremy Renner), the town’s unofficial power broker. The “mayor” of a small town is placed in a unique position to broker agreements between criminal groups and the authorities.

The program has received praise for assembling such an impressive cast and team. Because of the series’ taut, hyper-realistic tone, viewers are already itching for a second season to arrive. Is ‘Mayor of Kingstown’ season 2 something you’d want to learn more about? What we know thus far about it.

Season 1 of ‘Mayor of Kingstown‘ debuted on Paramount+ on November 14, 2021. The season finale will run on January 9, 2022, with the first two episodes uploaded concurrently on the streaming site. The first season consists of ten one-hour episodes in total.

It’s great news for the gritty McLusky saga lovers that there will be a second season of the criminal drama series. Whether or not the program will be renewed has not yet been made.

But Production Weekly revealed on December 23, 2021, that season 2 is already in the works. The sophomore season may have to wait a little longer than expected because there have been no official updates on when production will begin.

Must check: His Dark Materials Season 3 Release Date: Is This Series Cancelled or Renewed?

The second season of ‘Mayor of Kingstown’ is expected to be released in late 2022 if the current release schedule holds.

The authorities put the Kingstown jail rebellion to a bloody conclusion at the end of Season 1.

Mike decides to enter the jail and deal with the rioting convicts after finding that his younger brother Kyle is locked inside. P-Dog, the uprising’s commander, makes it quite obvious that he intends to send a message to the authorities in retaliation for the guards’ abuse of the convicts.

As a result, Mike cannot stop the execution of a jail guard in front of him.

After the brutal assassination of a correctional guard, the prison’s security officers open fire, killing hundreds of inmates and putting an end to the riot. Following their near escape, Mike comes home to find Iris waiting for him at his cabin in the woods.

The following season will begin with Mike attempting to pick up the pieces of his crumbling business in the wake of the terrible riot. “Mayor” will have a hard time restoring normalcy in a city with no balance of power between law enforcement and criminal groups.

As a result of his harrowing experience in the jail during the uprising, Mike’s brother Kyle may also want to go somewhere more tranquil. That said, we can anticipate Mike to continue the violent tradition left behind by his father and older brother when the McLusky family returns for season two.

When it comes to Jeremy Renner, “Mayor of Kingstown” has an impressive cast, but the show’s success relies on his shoulders. In a November interview with the New York Times, the “Hawkeye” actor seemed sure that he would be returning for additional seasons of “Mayor of Kingstown.”

Others in the cast, though, appear mostly insignificant or underused. All bets are off now that Kyle Chandler’s Mitch is shown to die in the first episode. Disappointingly, Oscar-winning actress Dianne Wiest, who portrays the matriarch Miriam McLusky, appears in just a few scenes.

Season 2, on the other hand, may explore the roots of Mike and Miriam’s estrangement.

Due to Mike’s grief from losing two siblings, Taylor Handley, a former cast member from “The O.C.,” is expected to return for a second season as Kyle McLusky.

New characters may be introduced in addition to the expected return of these well-known supporting cast members since the series revolves around criminals, doomed correctional officers, and police who are on their last legs.