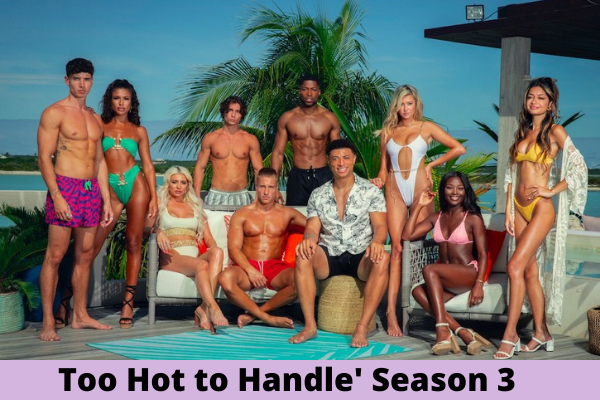 Laura Gibson and Charlie Bennett developed the dating series “Too Hot to Handle” to help people find love. The program’s plot centers on a group of attractive individuals who go to an exotic place for a few weeks.

They must go through a series of amusing sessions, but they are prohibited from engaging in any sexual activity while they are there.

If they complete their voyage while adhering to the guidelines, they will each get $100,000. The reality show premiered on April 17, 2020, on truTV.

Even though critics have widely panned the program, it has been a huge hit with audiences. A total of more than 50 million people tuned in to see the Netflix original series.

Multiple nations, including France, Germany, Italy, India, and Japan, occupied the top spot on the list. We’ve got good news for those of you who have been begging for a third season!

There will be a new episode of Too Hot To Handle Season 3 of Netflix’s reality program on January 19, 2022. Season 3 of “Too Hot To Handle” will feature ten all-new contestants. The participants’ identities and biographies were just made public by Netflix.

“Lana” is a virtual assistant who hosts the program, which focuses on the lives of ten individuals who are unable to develop meaningful relationships.

Too Hot to Handle’ Season 3 Cast

Too Hot to Handle’ Season 3 Plot

To meet new people and learn more about dating, the show brings together beautiful, unmarried young individuals. To build stronger bonds with others, they are not permitted to participate in any sexual behavior.

Individuals who have struggled to form meaningful connections in the past are helped by Lana, a virtual host who offers seminars.

The program revolves around drama and sexual tension. There is a potential for a group to win $100,000, but if any participants disobey the rules or engage in sexual activity, their share of the reward decreases.

During the second season, Cam and Emily accounted for $15,000. Marvin Anthony was named the winner and received $55,000 in prize money.

As a result, the third season of the series will follow the same sex-free guideline as to the first two. In addition, the structure and prize money may be tweaked in the future.

Too Hot to Handle’ Season 3 Trailer