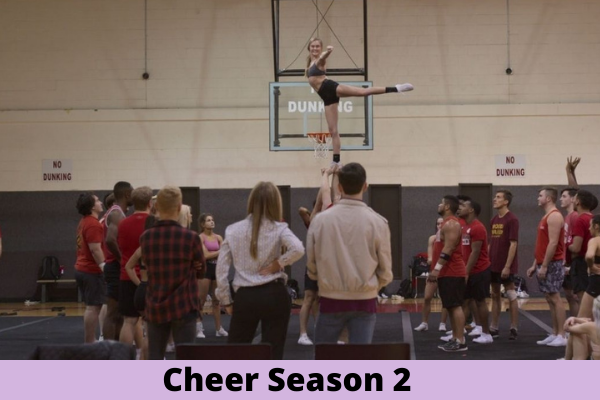 Netflix’s ‘Cheer’ follows Navarro College’s ambitious cheer squad as they navigate the ups and downs of trying to win the much-desired National Championship.

Emmy Nominated director Greg Whiteley acts as the program’s writer, director, and executive producer. As the ‘Last Chance U.’ football documentary creator, he is well recognized.

It’s as much about cheering as Last Chance,” Whitely said while discussing Cheer. You focus on football. In other words, cheering is a part of it. Cheerleaders do a lot of it. However, the most moving moments occur when you’re not working out.

Cheerleaders face the same challenges as other young people in college, but our series illustrates that off-the-mat concerns can’t help but spill over into competition.

My favorite scenes in the show are when the precision of their routines is shown with the complexities of their personal lives, and I’m looking forward to audiences seeing the rough yet beautiful world of Navarro College Cheer. “

On Wednesday, January 12, 2022, Netflix will release the second season of Cheer.

After the program became a streaming success in January 2020, production on the docuseries started. However, the shooting was halted in March owing to COVID-19, and the 2020 NCAA National Championship was subsequently canceled.

When an extremely dominating Navarro College cheer team in Corsicana, Texas, sets out to win the National Championship of Cheerleading, “Cheer” follows their every move.

During the documentary’s filming, the team’s behind-the-scenes activity and tension are revealed.

There are first-person accounts from members of the squad and anecdotes of their personal life, their families, and coaches, as well as the hardships they had in training and their eventual victory.

There are just two minutes and fifteen seconds in the competition, yet members give it their all out of respect for their loved ones, family members, and friends.

Cheerleading is still not generally accepted in our culture, and it isn’t easy to convince the traditionalists that it has any value. Some of the athletes come from broken homes or have been traumatized by family members who cannot see the sport through the same prism as the athletes do.

A Coed cheerleading group of 24 male and 14 female athletes, known collectively as the NC Cheer Team, can be found at Navarro College. They show up to all women’s, men’s, and youth’s home sporting events to show their support.

The college holds the highest NCA College Nationals score ever achieved by a single institution.

Netflix has published a teaser trailer for the new season of Cheer, which hints at all the Navarro drama that will ensue. According to Monica Aldama, “it’s undoubtedly the worst season I’ve ever had” in the trailer.

Cheer Season 2: What will Cheer season 2 be about?

As COVID-19 upends the 2020 cheer season, season two will take up Navarro Cheer after its first season triumph. The squad will have to cope with their newfound celebrity and juggle press attention with their cheering obligations.

The allegations of child pornography against Jerry Harris, a season one fan favorite, that surfaced during production will focus on the upcoming second season of Cheer.

As recently as September 2020, Harris was arrested and charged with soliciting sexually explicit material from kids, which he denied. For seven further sex offense allegations about four other juveniles going back three years, he entered a not guilty plea on December 20, 2020.

“We strongly reject the accusations made against Jerry Harris, which are purported to have happened when he was a teenager,” his spokeswoman previously said.

In the end, “we are convinced that the truth will come out,” said the investigator.

“The news of Jerry’s probe surfaced on the same day that Monica was making her debut on Dancing with the Stars,” Cheer director Greg Whiteley said. The shock and grief were palpable.

“The allegations against Jerry Harris are discussed in detail in episode five of the series, covering events from January 2020 through April 2021.” In any case, we believed it was vital to recognize it at the opening of the first episode to let viewers know that it’s not something we overlook.”

Also included in Season 2 will be an interview with the two boys who initially made charges against Harris and their mother, both of whom Whiteley said were “extremely kind” in consenting to participate in the docuseries.