In news that came as a shock to all Euphoria fans, Barbie Ferreira,...
HomeEntertainmentInto The Badlands...

Into The Badlands Season 4: Cancelled or Renewed? 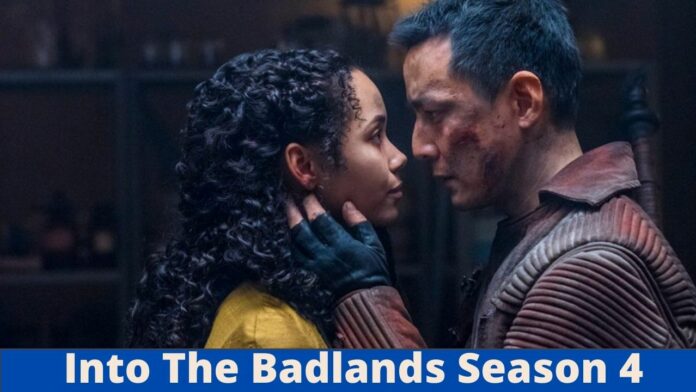 Season 4 of Into the Badlands could have taken viewers into an even bigger and greater universe, but the show was sadly canceled.

Have you seen the third season finale of Into the Badlands? If that’s the case, you’ll know it was a fitting end to a great event. While I enjoyed every minute of the conclusion, I can’t help but be disappointed that this program was canceled before the fourth season of Into the Badlands, which would have been even better.

Both The Widow and Sunny regained their powers in the finale. Tilda was gravely hurt, and MK and Pilgrim both perished. Before Moon could do her in, Cressida escaped on a boat, and we learned of an even greater threat approaching the Badlands: firearms.

What Is the Story Behind Into the Badlands?

Into The Badlands is a post-apocalyptic story set in the future after a nuclear war has destroyed much of humanity. The post-war period brought tremendous upheaval to the world, particularly in North America. In an area known as the Badlands, which comprises many states located between the Rocky Mountains and the Mississippi River, a feudal system has developed to fill the power vacuum created by the war.

Barons control land and monopolies on items like opium and gasoline, and they do so in order to maintain the peace. Each baron is served by a huge army of slaves known as cogs, as well as a prostitute class known as dolls.

Clippers are a group of young males and females known as barons’ soldiers, who are prohibited from marrying or procreating for fear of weakening their devotion. A regent is in command of each clipper army.

Who are the actors and characters in the Into the Badlands series?

The collection has several characters across the three seasons. They are listed below. Please let us know if any of these is your favorite.

Will There Be Another Season of Into the Badlands?

Fans were extremely eager to discover what would happen in Season 4 of Into the Badlands, however, AMC announced in February that the show would not be renewed for a fourth season.

Why Did They Stop Making The Badlands Series?

Many were disappointed by the news that Into the Badlands would conclude after season three, but it was not completely unexpected. Season 3 was the longest yet, and it appeared that AMC had still faith in the series despite how apparent it had become that enthusiasm for it at the network had dimmed.

Ratings have been on the decline for some time, but it isn’t due to a lack of excitement. The cause of the problem is most likely AMC’s dissatisfaction with the program, which saw a large decline following season 1.

The series didn’t live up to expectations at AMC, but it didn’t stop the channel from ordering a 16-episode third season at the conclusion of season 2.

Between seasons 2 and 3, there was a dramatic reduction in the amount of advertising material for Into the Badlands, which isn’t surprising given how popular it became.

Is It Worth Watching Into the Badlands?

Airing one episode after the other is more typical, but it’s unusual for me to discover a series that I can watch without stopping. Gough and Millar have created an outstanding action sequence. Bugei is an ancient Japanese term that literally translates to “martial arts.” The film focuses on martial arts and lots of sword fighting. Many of the most creative and well-deliberately directed on television are found in this program.

Most martial arts are wire-play versions of Kung-fu. The overall result is excellent. The camera movements are aesthetic in nature. The story is easy to follow from episode to episode.

The casting is near-perfect. The action and battle sequences are superb. Wu is incredible. The story takes place in the Badlands, a unique future medieval society in this series. This is a fantastic, creative series.

The official release date of the new K-drama “Uncontrollably Fond” is coming. The airing date for this particular episode will be revealed at a later time, so stay tuned to your favorite streaming site.

Where Can I Watch the Entire Into the Badlands Series?

The entirety of the world is ruled by a feudal system of barons, viceroys, territories, and clippers known as assassins, which may be viewed on the most popular internet video service. That is where Netflix comes in. Don’t forget to get a subscription for your watch, and don’t forget the time! Netflix is worth it!

There’s a lot more to Into The Badlands on Netflix than we were able to cover in this guide. We’ll come up with something even more about it soon! Until then, keep up with us.

Trending News Buzz – Latest News, Breaking News, Entertainment, Gaming, and Technology News is a social media feed that provides fresh and timely news stories from across the web. Follow us on Twitter to keep up with similar postings.