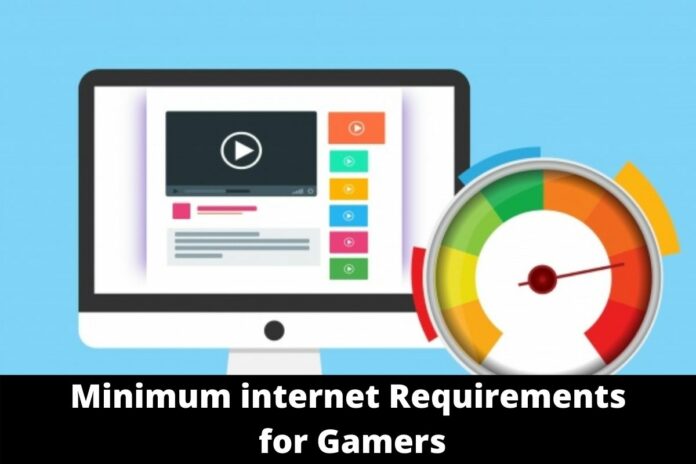 Playing online games might strain your internet connection, but unlike most other online activities, the limiting issue is not downloading speeds. If your latency is in the hundreds of milliseconds, no amount of speed will keep your game from lagging.

We’ve listed the most crucial aspects of internet speed for online gaming so you know precisely what to look for.

Online gaming isn’t usually the most bandwidth-intensive hobby. That’s because, unlike an online movie that streams straight over your internet connection, the graphics chip in your PC or console renders the game’s environment on your screen.

In reality, just a little amount of data is sent between the gaming server and the gamer. The following is a list of the types of information that is shared through the internet:

Player location is one of the elements on the above list that might cause slowdowns, particularly in massively multiplayer online (MMO) games. There may be more real on-screen players in these games than in usual online gaming scenarios, resulting in frame rate dips and player “teleportation.”

To play online, many current games with high-definition graphics only require a download speed of approximately 3 Mbps.

Because games are interactive, you must also consider upload speed, which is the rate at which data from your computer is transmitted to a remote server. Again, the amount of upload speed required is rather low, around 1–2 Mbps. This speed can even be achieved by bad connections that are why upload speed is considered an important factor here.

Let’s take a look at the table below, featuring the minimum speeds required by some of the most widely used gaming consoles.

You can play games online as long as your internet connection satisfies these conditions. However, if you want a more constant online experience, we recommend upgrading your connection. Check out Spectrum Deals to find high-speed internet plans at the most affordable rates, which provide the best gaming experience.

Games and gaming systems seldom provide exact recommendations since the real speed requirements are low. Instead, they only need a “broadband internet connection”. A broadband connection, according to the FCC, has a download speed of 25 Mbps and an upload speed of 3 Mbps, which is more than adequate for you to play multiple consoles online at the same time.

You may do a speed test to see whether you have a broadband connection if you’re not sure. Unfortunately, speed requirements ignore the most important aspect of online gaming i.e. latency.

Your worst enemy is high latency

Latency is the time it takes for a signal from your device to go to and return from a remote server. This is also known as “ping rate,” because it is calculated by sending a single “ping” of data back and forth. When your latency is too high when playing an online game, you will experience lag.

Latency is influenced by a variety of variables. The following are some of them:

Because location does matter, games that support co-op and multiplayer employ regional servers even if the server is not that far away.

This is because your signal passes through several “hops” on its way from you to the server. The more hops your signal must travel, the longer it will take to reach its destination, resulting in increased latency. Congestion might potentially create a delay in your controller input due to traffic congestion.

Type of internet connection you have

Fiber-optic connections, for example, can carry more data at once than copper phone lines, resulting in quicker speeds.

Your download speed or bandwidth is not the same as the pace at which your signals go back and forth. A movie will download slower over a 5 Mbps DSL connection than it will over a 50 Mbps satellite connection.

However, when playing games online, the DSL connection would be far more responsive, but the satellite connection’s high latency would create so much lag that most fast-paced games would be unplayable.

Because of these reasons, some internet connections are fundamentally slower than others. Because satellite internet is a wireless communication that must go to space and return to reach a remote server, it has the highest latency. Fiber optic cables have lower latency than both insulated and uninsulated phone lines, while insulated cable connections have lower latency than both.

The most reliable internet connections for online gaming

The ideal connection for playing games online is a fiber-optic service like Google Fiber or Verizon Fios. Cable internet is a close second, with certain 5G networks also offering reliable, low-latency connections. Then, there are other wired connections, which have a higher latency than wireless connections but are still better for gaming.

Latency data that is consistent and accurate is difficult to come by. Some of the most extensive studies of internet delay have come from the Federal Communications Commission (FCC). The FCC, on the other hand, no longer includes latency in its yearly broadband reports, thus, the latest technologies are often missed.

Although 5G is still a new wireless technology, it claims to offer lower latency than any previous wireless connection, specifically with its gigabit millimeter-wave tech. 4G LTE and 4G connections have far greater lag than cable connections, but they can achieve our suggested latency of under 100 milliseconds.

Recommended Read: 7 Ways How the Internet Has Transformed the Whole World.

When picking an internet package, choose the one with the lowest latency if online gaming is your priority. Keep in mind that other online activities such as live streaming, downloading games, or cloud storage have their own set of needs that should be taken into account.

How To Ensure Your Salesforce Data Protection