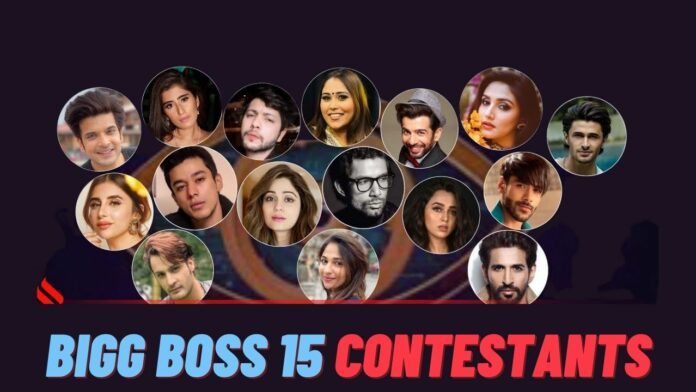 The Bigg Boss Season 1 aired in the year 2006. It’s been 15 years and the show is still sailing in the sea of reality TV shows in India. Bigg Boss is one of India’s most watched reality shows. The Bigg Boss series has its audience enthralled with the concept of watching celebrities living under the same roof without any privacy or luxury, 24×7 cameras capturing their personal, romantic, and dramatic side of life.

Bigg Boss is all prepared to present its season 15 on your screen from October 2, 2021, on Colors TV hosted by Salman Khan. This time the program will take place in a jungle environment, with the contestants staying in a tent before entering The house.

The majority of the contestants are currently confined in a hotel in Mumbai. The previous three female Bigg Boss winners will make an appearance at the start of the program, which is when they are among the most recognized faces of India’s television industry (Gauhar Khan, Shweta Tiwari, and Rubina Dilaik).

The show contains Drama, fun, action, Romance, and Salman Khan’s admonishing and humor during “Weekend Ka Vaar” with the competitors. After charging 20 crores in Bigg Boss 14, Salman Khan has reportedly become the highest-paid host of the reality program. Colors TV will broadcast The Verdict every Monday through Friday at 10:30 p.m., as well as Sunday evenings at 9:30 p.m.

Bigg Boss is without a doubt the main platform for Indian television celebrities, models, and commoners. After winning Bigg Boss 13, Sidharth Shukla’s popularity graph rose dramatically. Asim Riaz, a Kashmiri model who was a runner-up on the program, was able to dance with top Bollywood actress Jacqueline Fernandez despite his lack of popularity.

After Divya Aggarwal won Bigg Boss OTT, the next season of Bigg Boss 15 has acquired a lot of attention, and it’s clear that it’s generating buzz across social media sites, whether on Instagram, Twitter, or Facebook. Fans of this popular show are once again enthusiastic about the program.

According to the official website of Bigg Boss 15, Sahil Shroff is a confirmed contestant. Sahil made his film debut in Don and has previously appeared on television shows.

Asim Riaz’s older brother Umar Riaz is a former model and actor, and his popularity among Asim’s fans has already shifted to Umar. He’ll be a powerful participant in Bigg Boss 15 House, according to his supporters.

Shamita Shetty, the second runner-up of Bigg Boss OTT, is confirmed to appear on Bigg Boss 15. She is a well-known Bollywood actress who has yet to achieve much success; however, she has proven herself to be a fierce competitor in shows like Bigg Boss OTT lately.

Nishant Bhat, the first runner-up of Bigg Boss OTT, is also confirmed for Bigg Boss 15. He is a dance and choreographer by trade, but his popularity was fueled by Karan Johar’s spinoff edition of the show (Bigg Boss OTT). His game and strategies were highly praised in Bigg Boss OTT. It’ll be interesting to see him again in the house, as well as what strategy he’ll utilize this time around.

Afsana Khan is a Punjabi singer who rose to prominence with the song “Jatta Sareaam Ve Tu Dhakka Karde” (featuring Siddhu Moosewala), which was released in 2012. She made her debut in Voice of Punjab season 3 in 2012 as one of the confirmed contestants.

Tejasswi Prakash, who is best known for her role in ‘Swaragini: Jodein Rishton ka Sur’ has made a name for herself as a TV actress. She’s been confirmed to appear on Big Boss 15 as she was featured in the latest color television advertisement.

Ieshaan Sehgaal is a fit and attractive model who has recently appeared in a music video as well as mentioned his acting career with “Rishton Ka Chakravyuh on Star Plus.”

Known for his work on Kitni Mohabbat Hai, Karan Kundrra has hosted MTV’s Love School show since season 2. Some of his most popular movies include Horror Story, Mubarkan, 1921, Dolly Kitty, and Wo Chamakte Sitare.His face is known to everyone in television.

He began his career on MTV Splitsvilla, where he is best recognized for his recurring role as Shakti-Astitva Ke Ehsaas ki in the soap. He was reportedly offered a role on Bigg Boss 15.

He got his start in television on MTV Splitsvilla, where he played the lead role of Shakti-Astitva Ke Ehsaas ki. He was reportedly approached for Big Boss 15 as well.

Vidhi Pandya is a well-known television actress who has appeared in Udaan, Ek Duje Ke Vaaste 2, and Balika Vadhu. She is one of the youngest competitors on Bigg Boss 15, where she was born June 6, 1996.

Miesha Iyer is a well-known tv reality star who won Splitsvilla season 12 and has been confirmed for Bigg Boss 15.

A number of TV serials, such as Akbar Ka Bal Birbal, Devon Ke Dev Mahadev, and Mahabharat star Devendra Kumar has acted in a few films but is best recognized for his TV work, now confirmed to appear on BB-15.

She began her career as an anchor for Chitrahaar on DD National. She is most recognized for her part as Shanaya in Sony Tv’s Ek Deewana Tha, and Colors Tv’s Roop: Mard ka Naya Swaroop.

Pratik Sehajpal, a veteran of MTV Splitsvilla and BIGG Boss OTT, has confirmed his inclusion in BB 15 by accepting the ‘Ticket to BB 15′ during the show’s final episode. Fans are curious about how he will deal with new housemates and what approach he will take to win the competition.

Kasa is a Bollywood playback singer who is recognized for her song Kheech Meri Photo from the film Sanam Teri Kasam in 2016 and Naagin with Astha Gill. She has been chosen as a probable participant on Bigg Boss.

Here are the celebrities who will compete in the Bigg Boss 15 house as contestants, along with a little Bio that tells you more about them. Please leave a comment below if you think one of these famous folks is going to be your favorite among these famous personalities.