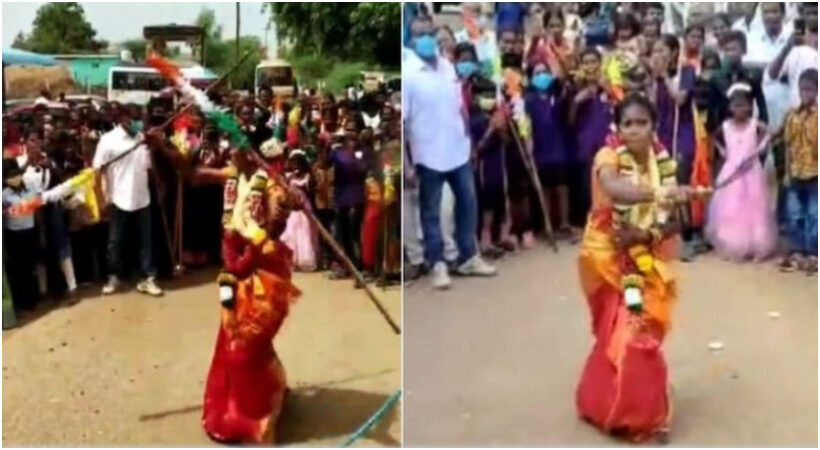 Nisha, a 22-year-old native of Thoothukudi, went viral today with a video of her traditional martial arts performed in front of guests on her wedding day.

Nisha was married on Monday morning, June 28. Nisha first surprised the guests with a sword and other weapons after the wedding ceremony was over. But the guests were in the audience as the newlyweds carefully folded the sari and waved the 3,000-year-old statue.

Nisha was performing on the road in front of the wedding hall in Tirukoilur village in Thoothukudi, Tamil Nadu. Nisha performed flexibly with swords and long sticks such as ‘Surul Val Weesh’, ‘Rettai Kambu’ and ‘Adimurai’. As the footage captured by the guests went viral, many people shared the video on social media congratulating Nisha.

Interesting comments are developing in response to the video.

Asli naari???? she looks more beautiful and powerful than many filtered, colored and babu shona material ????

Nisha told the Times of India that she received her martial arts training from her husband and cousin Rajkumar Moses, 29. Nisha, who has been studying martial arts for the past three years, also wants more people to learn this art. “I performed the traditional martial arts before the villagers soon after the wedding to make women aware of the importance of self-defence. I have been learning this for the past three years. I want more people to learn this art,” Nisha added.

#WATCH Nisha from Thoothukudi district performed ‘Silambattam’, a form of martial art from Tamil Nadu, soon after her wedding ceremony on 28th June, to spread awareness about the importance of self-defense#TamilNadu pic.twitter.com/giLOPy1iDZ